Movie or Not, We Can still Be Friends: Veronica Mars the Movie

(Originally published 18 May 2014. Kind thanks to Catcher in the Reel for permission to repost.) 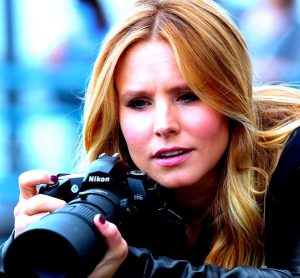 In the summer of 2013, Kevin Spacey gave a speech in Edinburgh in which he discussed the changing nature of visual media in relation to distribution and exhibition. Spacey used the opportunity to promote his show House of Cards and the all-at-once model of online distribution that Netflix, the show’s producer, has developed to deliver the show to viewers. However, in discussing the breakdown of the borders between “film” and “TV” and the ways in which people watch these days, he raised some pertinent questions. If most people watch films at home now – on a TV or some type of computer – what makes them films? If shows like House of Cards and Orange is the New Black are produced as one, 13-hour story arc and are delivered all at once, what, aside from length, makes them different from film? Who decides what a “film” is or what a “TV show” is? Is it the intention behind the production (“we’re making a movie, so it’s a movie”) or is the platform via which viewers watch? Making a fairly conservative but no less insightful prediction, Spacey argued, “any differentiation between platforms will fall away” in a few years, that “the device is irrelevant . . . the labels are useless.”

This discussion has been ongoing for some time now, but it has mostly revolved around the increasing filmification of certain TV programs during this new “Golden Age” of television. But what about films that are, essentially, expensive, extended TV shows? Can film be as much like TV as some TV is becoming like film? There are several ways a TV show can become a film. A pilot might be re-cut or extended and released as a film version, particularly in other markets. Also, since at least the late ‘80s there’s been the very common trend of re-imagining TV shows, with a new cast, updated setting, etc. – this has included everything from the Brady Bunch movies to 21 Jump Street. But there is also a tradition of continuing a series’ story – same cast, same setting – via film once the show has gone off the air. Perhaps most famously, and (arguably) most successfully, this has been carried off by the Star Trek franchise, with ten films to date extending the stories of both the original series and The Next Generation (plus J.J. Abrams’s two re-imaginings). When Joss Whedon’s sci-fi western series Firefly was canceled after one season, he somehow cobbled together the studio funding and support to make a follow-up film, Serenity, two years later. And while the model makes sense for a show like Star Trek or Sex in the City, both of which had huge fan bases as TV shows who could be reliably expected to pay to see the films in cinemas, who, besides a small group of die-hard fans, was really clamoring for more Firefly?

The same could be asked about Veronica Mars – perhaps with even more justification. While its three seasons on UPN and the CW outpaced Firefly’s ignominious single season on Fox, at least Whedon et al. managed to get Serenity into cinemas only a couple short years after the series’ cancellation.Veronica Mars, the show about a brilliant, sassy teenage private detective who solves local crimes while working with (or sometimes at odds with) her P.I. father to solve each season’s overarching crime(s), went off the air at the end of the 2007 season. Warner Bros., who owned the property, insisted for years that no movie would be forthcoming, and as each year passed without a film, the idea that the TV series’ unresolved story lines could be tied up seemed less and less likely. So asking, seven years later, what’s the point of making such a film doesn’t seem like an outrageous question. After all, with a broadcast average of 2.5 million viewers and mediocre dvd sales, who (again besides a small but raucous group of fans) was demanding such a film?

In large part, and perhaps most importantly, it was the cast and crew themselves. Series creator Rob Thomas had long been vocal about wanting to continue to explore the stories of Veronica and the denizens of Neptune, California. And whenever the question came up in interviews with Kristen Bell or other cast members, they were always enthusiastic, if only cautiously optimistic, about such a project getting off the ground. In the end, it was they – sort of – who made it happen. As is well known by now, in March of 2013 Thomas and Bell launched a Kickstarter campaign to raise funds for a movie. Within a month, the campaign had raised nearly $6 million, setting several Kickstarter records along the way (for example, becoming the fastest project to raise $1 million, which it did on its first day – in fact, it broke $2 million in less than ten hours). Suddenly, thanks to fan determination, a nearly impossible dream had become a reality – production launched in June, wrapped by the end of July, finished reshoots and post-production by the end of the year, and the film was in cinemas in limited release in March 2014, almost exactly a year after the Kickstarter campaign began.

Obviously somebody wanted to see Veronica in a movie.

But, returning to Spacey’s comments from the top, is Veronica Mars a film proper? As part of the Kickstarter deal, anybody who donated $35 or more received a free digital download copy of the film on the same day of its theatrical release (14 March) when it also became available as video-on-demand. As a film, it saw only limited release in the US (and not at all here in Northern Ireland). It’s safe to say that more people saw Veronica Mars on televisions, computers, or other electronic devices than saw it in the cinema. Now that it’s available on DVD the discrepancy between those groups will only grow.

Does it matter? Perhaps, in this case, no. Thomas, Bell, and the rest of the gang wanted to tell more sordid stories about Neptune, and the show’s fans wanted to see those stories. In the end (and aside from a few glitches in the initial delivery of the digital copies), everybody’s happy. Thomas has even hinted that there might be more stories to tell and all involved seem game if they can, once again, scrounge up the comparatively paltry sum (in Hollywood terms) necessary for another go-round. But the relative success of Veronica Mars as a project has most definitely acted as a wake-up call not only to Hollywood suits, but filmmakers, writers, and so on, that the rules of the game have changed in reference to all three of the old standbys of Hollywood power: production, distribution, and exhibition. Spike Lee has turned to Kickstarter to raise funds for his next project, while Joss Whedon has just released his micro-budget film project In Your Eyes via online distribution, bypassing a studio release altogether.

It’s certainly far too soon to start making pronouncements about the “death of cinema” or to jump on Spielberg and Lucas’s train of doom. However, Spacey’s claim that the “labels are useless,” may not be too far off the mark. We’re certainly in a period of flux, an exciting one at that, wherein the ways and means of making, distributing, and watching visual media in the future are still being worked out – by practitioners and audiences alike. It doesn’t really matter if Veronica Mars is a film proper or something more like a two-part special episode of the show itself. Its importance lies in being a herald of a future where the concept of what a movie is will be something very different from what it is today.

But what about the film itself – is it any good? A film like Veronica Mars is almost review-proof. If you were a fan of the show, you’re likely to love it. It’s beautifully shot by Thomas and cinematographer Ben Kutchins and includes some ingenious editing by Daniel Gabbe (who also worked on the show). It manages to rope in tons of characters from the show in ways that seem natural rather than forced (setting much of it at and around a Neptune High ten-year reunion helps), the entire cast seems to be having a blast, and the film includes lots of fun, sly references to the original series (for example, the distinctive Dandy Warhols tune that served as the show’s theme song pops up early in the film as an acoustic number performed by a street musician). The central mystery and the twists and turns Veronica goes through to solve it closely resemble many of the series’ own plots – both in their randomness and in the cheeky way Veronica goes about piecing the puzzle together. Refreshingly, the film also continues the show’s intricate interrogation of class-based issues of power and corruption in America. Most importantly for the way it was funded, the film doesn’t dumb anything down, over-explain anything, or spend too terribly much time ladling out exposition for audience members who haven’t seen the show. It’s a film for the fans and it expects its audience to be up to speed on the background details. This may prevent it from garnering wide appeal, but I found it a nice nod to the film’s origins: the producers know very well who wants to see this film and they made the film for that audience.

To put it simply, if you’re a fan of Veronica Mars the series, you’ll most likely have a ton of fun with Veronica Mars the movie. And if you’re not . . . well, what the hell are you waiting for? Get ahold of Season One (one of the most nearly perfect seasons of serialized television ever) and start watching!