The Sensuous Life Is a Perilous Venture: Under the Skin

(Previously published 12 April 2014. Kind thanks to Catcher in the Reel for permission to repost.) 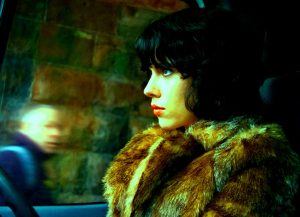 Under the Skin is a film that dares you to like it. Perhaps “like” is not the right word. “Enjoy” is closer to what I mean. Under the Skin is rather easy to like in the abstract – if one is a fan of art films, thoughtful (or, depending on your point of view, superficially thoughtful) films, non-mainstream films of any stripe, then it’s easy to think Under the Skin is a great film, a cool film, a provocative film. But to actually enjoy sitting through it is another thing – to thrill at experiencing its many repetitions, its long stretches with little or no action, its many confusing sequences. It’s one of those films that tells the viewer, I know you want to enjoy this, you probably think you’re supposed to enjoy this, but let’s see what watching it actually does for you!

The film, directed by Jonathan Glazer (Sexy Beast, Birth) and based on Michael Faber’s novel of the same name, stars Scarlett Johansson as an otherworldly being on a mysterious collection mission in Glasgow, Scotland. Whether she’s an alien or some sort of cybernetic being is not totally clear, but she does seem to work for aliens. And her mission? To collect the young men of Glasgow – mainly, it seems, working class men with few attachments to family or other people (likely to increase the length their absences will go unnoticed) – for nefarious purposes. In her capacity as collector, Johansson drives around the city in a nondescript white van asking for assistance from unsuspecting young men, whom she then ushers to “her place,” an isolated old pile that houses more than its exterior implies. Once inside the men are tricked into removing their clothes and then slipping into a sort of alien bath from which they’ll not return.

Much of the film’s first half consists of following Johansson on her rounds. Each successful run further clarifies the nature of the house, but beyond that there is a great deal of repetition, which, depending on one’s patience for such things, is either “hypnotic” or “boring” (the two words I’ve heard most in discussions about the film’s early going). However, a series of events in the middle of the film leads Johansson to start questioning not only her role in gathering these specimens, but also, it seems, her purpose in life. After one particular encounter that is equally uncomfortable and moving, she leaves the city behind, with her alien guardians in pursuit. The choices she makes from this point on lead to a harrowing final act and a highly disturbing form of punishment. How one reacts to the final act, to the final shot, will depend largely, I think, on how you have responded to the immersive nature of the film’s first hour. If you fall into the “hypnotic” set, then the end is likely to be quite shocking, moving even, in a horrifying fashion. If you fall into the “boring” camp, then the end – regardless of the skill of its composition – is likely to leave you with that finally-it’s-over feeling.

Regardless of one’s reaction to the elusiveness of the narrative, the film’s formal characteristics are something to experience. Quite simply, it looks and sounds amazing. In the alien abode, Daniel Landin’s clean, futuristic cinematography (reminiscent of Kubrick) conveys the environment’s frightening sterility. But when it moves onto the streets of Glasgow and into Johansson’s van, it takes on a hand-held, fly-on-the-wall quality (the filmmakers actually developed a new type of camera, reportedly the size of a matchbox, eight of which were hidden around the van so as to film as unobtrusively as possible). Then there are the under-water shots, the forest, the fire, each with their own visual palette. Holding all these various styles together is the sound design (Johnnie Burn), intricately woven with Mica Levi’s minimalist score to create an ambient, otherworldly soundscape, which plays a major role in creating the film’s immersive qualities.

In the midst of the film’s ambiguity, both anchoring and expanding it, is Scarlett Johansson as the creature. Speaking (when she does) with a light London accent, Johansson is in every scene, and the film seems to be as much about her own process of self-discovery as it is about the horrific end to which she leads her victims. For much of the film, her expression remains blank or faintly friendly, and her intonation only just lilts beyond a monotone. But her real identity and, beyond luring these unfortunate men to their demise, her role in the grand alien scheme of things is not made readily clear. The haste and fury with which her overseers pursue her once she flees Glasgow seems to indicate that she is their employee at best, perhaps their indentured servant or slave, or maybe, if she is actually some sort of ‘bot, their possession. How much one cares about such questions will depend largely on one’s patience for thinking about them in the midst of such a difficult film.

Leaving so much open to interpretation makes the film – much like its central protagonist – something of a blank screen, onto which a viewer might project any number of readings. A feminist reading might condemn the film for the way it punishes the creature for her sexual awakening (thereby “slut shaming” her); alternatively, a more sympathetic reading might see the film as a critique of the ways in which society in general punishes individuals for sexual behavior (nobody who thinks about having sex in this film ends very well, male or female). Is the film condescending to the working class men of Glasgow who comprise most of Johansson’s victims? Or is its depiction of Johansson as a creature limited to servitude a deconstruction of the owner-worker imbalance inherent in capitalism? That the film is open to so many interpretations will, again, infuriate many viewers. But it’s also part of what makes the film so much fun to talk about for days after seeing it (it’s also the reason why reviews of the film tend to fall into either the “it sucks” camp or the “it’s the best film I’ve seen in ages” camp).

My own reading, which I’ll admit is a bit wishy-washy and which took some time to come to, is that it’s a film about feelings and emotional connections. Anybody in the film who opens themselves up to emotion even just a little bit is punished. This includes not only Johansson’s victims and later herself, but a young man who tries to help her at one point and, in perhaps the most disturbing scene in the film, a young couple and their baby at the seaside. Whether the city itself, working life, or isolated nature, something is around every corner ready to bludgeon you, to tear at you for allowing yourself to connect with another human on an emotional level. Hell, even the film itself will punish you for enjoying it.

This entry was posted in Previous work and tagged Aaron Hunter, Jonathan Glazer, review, Scarlett Johansson, Under the Skin. Bookmark the permalink.