The Necessity of Fiction: The Grand Budapest Hotel

(Originally published 3 April 2014. Kind thanks to Catcher in the Reel for permission to repost.) 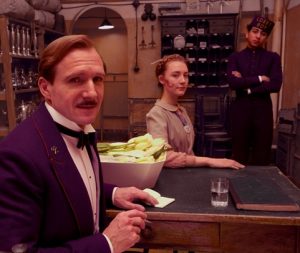 The Grand Budapest Hotel, the new movie directed by Wes Anderson, is a story about a hotel. It’s also about a writer who visited the hotel, and about some men who worked there. It’s about war, and friendship, and love. But really it’s a story about stories – who tells them, what they mean to us, how they change with the telling and, perhaps most importantly, why we need them. This is nothing new, really – cinema and other arts have long been fascinated by the nature of storytelling and have used that fascination as a starting point to deconstruct their own particular apparatus of conveying narrative. Don Quixote and Tristram Shandy did it centuries ago, and films as various as Citizen Kane and Robert Altman’s The Player can be described, at least in part, as meditations on the nature of storytelling.

What makes The Grand Budapest Hotel work so well is how – like the best self-reflexive art – its formal structure and stylistic elements intertwine with its narrative(s) on several levels not only to push the story forwards (or backwards), but also to disrupt that story and even challenge its veracity.

What is its narrative? Most discussion of the film, rightly so, focuses on the story at its heart: in 1932, the earliest days of the lead-up to the Second World War, in the fictional Eastern European country of Zubrowka, Gustave (Ralph Fiennes), the concierge of a large, luxury hotel, attempts to clear his name of murder with the aid of his new lobby boy, Zero (Tony Revolori). As the potential for occupation intensifies, Gustave and Zero race around the tiny, mountainous nation in a series of increasingly zany antics, skirting dangerous encounters with soldiers, underworld criminals, prison, and a suspicious pâtissier. Throughout their escapades, their friendship grows and they develop a nearly familial bond, the memory of which stays with Zero into old age (F. Murray Abraham), long after he has taken ownership of the hotel.

But while that is the main story, it is not the only story. It’s actually a story within a story, within a story, within a story. Phew! The film begins with a teenage girl in the present day visiting a cemetery monument to a writer she seems to admire. In her hand she holds a book of his memoirs. In a neat Anderson trick, the overhead shot of the book not only acts as a device to further the plot of the film, as in so many of his previous films, it actually contains the plot – it is the plot. As the girl begins reading a chapter about the author’s visit to the hotel in 1968, we jump into the book – but not before first visiting an intermediary scene, that of the author in 1985 (Tom Wilkinson) attempting to write the chapter that the girl is reading. As he writes the chapter, we journey with him, and her, back to his supposed visit to the hotel in 1968, where he (played as a younger man by Jude Law), meets Zero, the hotel’s mysterious owner. Over dinner one evening, Zero relates the story of his adventures with Gustave during the early 1930s.

With this framing device in the hands of such meticulous filmmakers as Wes Anderson and frequent collaborators Robert Yeoman (cinematographer) and Adam Stockhausen (production designer), one would expect heightened attention to detail with each of the film’s time shifts: clothing, utensils, vehicles all change appropriately. The hotel of 1968, in its grim communist-era efficiency is perfectly contrasted with the vibrancy of the pre-war hotel at the height of its popularity. But the film does more than that. With each shift back in time, the color palette brightens; clothes don’t only change to reflect the style of their era, they seem to become more costume-like – less the outfits that a concierge or a grand dame of 1932 might wear, and more like the costumes that actors playing such characters would wear in a contemporary stage production. Furthermore, many of the exteriors during 1932 are lovingly constructed but very obvious models, lending the film a further sense of unreality. Most interestingly, as the film leads us back in time, its formal structure is altered by means of changes to its aspect ratio. In the present day and in 1985, the film has an aspect ratio of 1.85:1, which is standard for Hollywood films these days. In 1968, it switches to the great anamorphic wide-screen format of 2.35:1, and during 1932 – most of the film’s running length – it plays in “Academy ratio,” 1.37:1 (for more on the film’s use of aspect ratio, see this helpful Slate article). More than any of the film’s other changes – costume, mise-en-scène, color – this formal reconfiguration calls attention to the film’s recognition of itself as a film.

In a sense, then, the film hyperfictionalizes itself. It’s like a complicated round of the children’s game telephone, where a whispered message passes from the ear of one child to the next until the final iteration represents a skewed version of the original message: close enough to sound familiar, but entirely different in its own right. Along the way, nobody lied, each child repeated what she was told, but the act of interpreting changes the telling. The passing of the story from an actual event, to Zero’s reiteration of it to the author over 30 years later, to that author’s writing it down nearly 20 years after that, to our experience of it via the eyes of a teenage girl another 30 years later provides several instances of interpretive re-evaluation. Add to that the changes in design and aspect ratio, and you get a story that, at its heart, is very hard to believe.

And yet this seems perfectly suited to the evolution of Anderson’s approach to narrative. From at least The Royal Tenenbaums, if not earlier, Anderson and co. have been constructing films that seem simultaneously of this world but different. They are just a little bit more than quirky, a little bit more than skewed. In an earlier piece, I described it as being similar to visiting a foreign country where they speak your language, but not in the same way. In his previous two films – The Fantastic Mr. Fox and Moonrise Kingdom – Anderson heightened this otherworldly sense by, in the first instance animating a children’s story about animals, and in the second setting it in the near past (and also, it should be said, formally interrogating the truth of the narrative). These filters of hyperfictionality strengthen Anderson’s films, in my mind, because they allow his quirk room to breath. One is no longer bogged down, as some reviewers in the past have been, by the patina of unreality that glares off the families in The Royal Tenenbaums or The Darjeeling Limited.

In the case of The Grand Budapest Hotel this allows the film’s alternate history to take on a believability that it might not have been able to had the film been set in Poland or Czechoslovakia. This marks it as very different from a film such as Tarantino’s Inglourious Basterds, which presents itself for much of its run time as a true-to-life historical fiction, and then completely upends itself in the final act. The Grand Budapest Hotel, by establishing its heightened fictionality from the outset, has no need to hide its designs; in fact, it puts them on display in every way possible.

This could all be seen as a formal exercise except that it’s also integral to the film’s central story of friendship. Throughout the film, Gustave displays a cavalier attitude to nearly everybody he encounters. As an exemplar of his profession, he is incredibly kind and gallant to his hotel’s guests, but he also sees them as a means to an end. He uses people. He is able to do this, in part, because he has told himself a story about who he is, who they are, and how all of their places in the world can point to his future financial success. He also uses Zero. He is kind and gracious to the boy, as he is to everybody, but generally out of self-need: he makes Zero his heir not out of love, but as a bargaining chip to get the boy’s help in clearing his name. He has also told himself a story about Zero: a desperate little immigrant boy with a funny name and a strange religion. But as the film progresses, the “telling of” Zero’s story changes. During a key sequence when Zero has gone to immense lengths to aid Gustave, but not to the latter’s satisfaction, it finally comes out that Zero is not an immigrant by choice, but is, rather, a political refugee. Nothing about Zero personally changes, but this change in his story makes Gustave look at him completely differently. Gustave’s interpretation of Zero has changed. This point is vital for the outcome of the film. Early in their relationship, Gustave and Zero take a train ride during which they are accosted by soldiers. Zero doesn’t have proper transit papers, and Gustave sticks up for him, but mainly because he sees Zero as his employee, his possession almost. This scene reoccurs near the end of the film with different, much more serious soldiers. Gustave again defends Zero – with dire consequences – but this time out of love and respect, not a sense of employer obligation or ownership. Gustave’s story about Zero has changed and so his relationship to him has changed as well, and it’s on this exact moment that the whole of the story hinges, for it’s this moment that leads directly to Zero becoming owner of the hotel, to his not being able to sell it, and to his eventual relating of the story to the author.

There’s much more that could be said about the film. The acting is uniformly excellent with Fiennes giving one of the best performances of his career. There’s also a wonderfully complex series of metaphors about “the other” – conveyed via Gustave’s sexuality, Zero’s immigrant status and ethnicity (he comes from a non-specified Middle Eastern country, but Gustave also refers to him on a couple occasions as a “gypsy”), and the rise of anti-Semitic fascism.

It should probably also be mentioned that the film, like much of Anderson’s work, lacks anything resembling a well-rounded, fully developed female character. Tilda Swinton’s Madam D., whose death sets the plot fully in motion, is hideous in appearance (and alone makes the film worth the price of admission), and Saoirse Ronan does her best in a very limited role as Agatha, young Zero’s love interest. But both are more plot devices than characters. With females like Rushmore’s Rosemary and Moonrise Kingdom’s Suzy, Anderson and his writing partners have demonstrated an ability to write (and cast) fascinating girls and women, but too often they are relegated to secondary roles as love interests or caricatures (the strength of The Royal Tenenbaum’s Margot is in large part down to Gwyneth Paltrow’s performance of a fairly thin character). This is most troubling in The Darjeeling Limited when a woman of color (Amara Karan) makes a rare appearance only to serve as, basically, Jason Schwartzman’s “life-changing” fuck buddy.

Alternatively, however, the film does invest both a person of color and a sexually ambiguous man with real humanity and depth for the first time in Anderson’s filmography.