Paper Moon (The Directors Company/Paramount 1973) is a lovely little film. Set in the Depression-era Midwest, it features charming performances by Ryan O’Neal, Madeline Khan, John Hillerman, and nine-year-old Tatum O’Neal (Ryan’s daughter). László Kovács’s black and white cinematography is stunning, Polly Platt’s lovingly meticulous production design is highly evocative of the mid-30s, and it’s all directed with crisp efficiency by Peter Bogdanovich. The film received mixed reviews on its release, but was a box office smash, and Tatum O’Neal went on to win an Oscar for best supporting actress (although she’s the star of the film), still the youngest ever winner of an Academy Award.

As I’ve been researching the work and career of Polly Platt over the past couple of years, I’ve become a bit obsessed with this film. I don’t think it’s necessarily the best work in her filmography (or in Bogdanovich’s), but I do think it’s a lot better even than its pretty good reputation. Part of what makes it work is that it’s a film that’s very concerned with its surface – not just the striking cinematography and design, but the beautiful actors and the slight, rapidly paced script that hops from one set piece to the next with a refreshing buoyancy that is part of what makes the film still hold up remarkably well today.

But all that lovely surface masks a deeper, mostly hidden movie that the screen presentation only hints at. With all the film’s hijinks, the Great Depression itself becomes more deep background than the ever-present tragedy of the ‘30s-era films that Paper Moon hearkens back to. We do run across a few Dust Bowl stragglers, and Tatum’s Addie expresses sympathy for them, but the film treats them more as props than fleshed out victims of one the country’s greatest historical tragedies. It’s a light-hearted comedy romp, after all.

Perhaps even more suppressed is the film’s central death, with which it opens but soon moves breezily beyond. The film concerns Addie Loggins, whose mother has recently died (a funeral opens the film, as Addie’s mother is literally and metaphorically buried). At the funeral arrives Moze Pray, a man who once spent a bit of time with Addie’s mom a few years back. Moze may or may not be Addie’s father – he doesn’t want to admit it, but he does agree to help her travel from Kansas to Missouri where she has relatives that will take her in. Thus their adventures begin. Moze is a small-time con man and soon learns that Addie makes a highly competent sidekick, so they travel across flat, dusty stretches of the American Midwest ripping people off, meeting colourful characters, and learning to care about each other.

But for most of the film’s runtime, the death of Addie’s mother is pretty much forgotten. She’s mentioned on a few occasions, usually for one of two reasons: the con artists exploit her death for sympathy from their marks; or Addie grills Moze about how he knew her mom and whether he might be her father.

There’s probably more than a bit of realism to this. The Depression was tough, and especially tough on kids, who not only lost parents, but were often forced to leave their own homes because their parents could no longer afford to support them.* But knowing that Depression-era kids were masters of the grin-and-bear-it approach to tragedy doesn’t diminish the sense that Addie is never given the opportunity to deal with, or hardly even acknowledge her trauma, and is likely suppressing an unhealthy amount of grief.

Bogdanovich often recounts how Platt, his ex-wife, convinced him to make the film because doing a “father-daughter” picture might help him better understand his own two young daughters. The two had only recently split up when Bogdanovich left Platt for Cybill Shepherd, and Platt didn’t want to work on Paper Moon (it was her fourth and final film with Bogdanovich) because her pain over the separation was still too raw. Furthermore, it had complicated her professional life as well – in an interview in the 2011 documentary Corman’s World, she puts it tersely: “My husband left me and the phone stopped ringing.” Yet work on the film she did, not only designing it, but also contributing to the script, pushing for the film to be set in the Midwest rather than the deep South of the source novel, and suggesting that Bogdanovich cast the O’Neals. 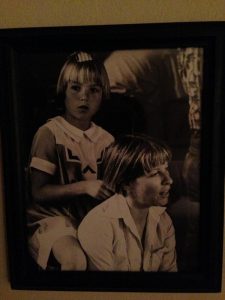 Polly Platt and Tatum O’Neal on the set of Paper Moon.

When analyzing film, my general approach is to avoid reading too much of the creators’ biographies into the text. However, I do find it fascinating that just as Bogdanovich was leaving his wife and two daughters, he decided to make a film about father-daughter relationship in which the mother is dead and buried (after Paper Moon wrapped, he’d head off for an extensive trip/shoot in Europe, making Daisy Miller with his new partner Cybill Shepherd). It becomes even more interesting if one knows a bit about Tatum O’Neal’s strained relationship with her mother Joanna Moore, who had lost custody of Tatum only two years before the filming of Paper Moon.

Thus we have a film about a father-daughter relationship in which the mother is dead and buried from the first scene and rarely mentioned throughout. One of the primary creative forces behind the film (Platt) is a mother who’s been abandoned by her husband and is being ignored by their industry (she would rebound!). And the film’s star is a young girl who’s been taken from her troubled mother and whose relationship with her father and co-star remains fraught to this day.**

The emotional intensity of these overlapping relationships – real and fictional – is most poignant in one of the film’s quietest, most striking scenes. Late at night, after Moze has come home from an evening of carousing, Addie slips into the bathroom of their cheap motel and explores her box of treasures. Here are all her keepsakes from her mother, including her one photograph. As Addie studies the picture, we see her mother for this one and only time in the film. I’ve written elsewhere about Platt’s contribution to the scene, but it’s worth mentioning that not only did Platt probably suggest Tatum’s Addie copy her mother’s pose, but she also designed and sewed the cloche hat that the mother is wearing in the photograph and that Addie would wear throughout the film, the one constant signifier that Addie, and the film itself, remember her mother.

In this short video essay, I’ve tried to re-contextualise the role of (or absence of) the mother in the film. As is probably clear by now, there isn’t really a lot to work with in attempting to reinscribe the mother into the film. It’s that absence that I’m trying to probe.

*For an excellent, moving account of kids who were forced to leave home during the Depression, I highly recommend the 1997 PBS documentary Riding the Rails, which is pretty easy to find online.

**For a fascinating account of Tatum and Ryan’s stardom and how it affected their relationship, see Maria Pramaggiore’s chapter “Filial Coupling, the Incest Narrative and the O’Neals” in Shelly Cobb and Neil Ewen (eds.) First Comes Love: Power Couples, Celebrity Kinship and Cultural Politics.