Searching for Polly in the Bogdanovich Archives: Week One 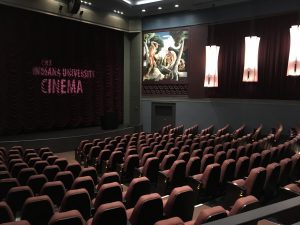 I’m not really sure about the permissions of posting archival images on a blog, so here’s a shot of IU’s very cool cinema.

I’ve reached the halfway point of a two-week stint at the Peter Bogdanovich archives at Indiana University in Bloomington. I’m going to save the “big conclusions” for after the trip is complete because I still have a lot of material to get through, but a pretty obvious truth seems to be emerging that would be silly to gloss over completely.

There’s not a whole lot of Polly Platt material in the Peter Bogdanovich papers.

Well, I should qualify that. The archives cover most of Bogdanovich’s life, but they really kick off in the late ‘60s with production materials on his first feature, Targets. There’s a fair amount of personal correspondence between Platt and Bogdanovich from this era through the mid-70s. It’s been fascinating to read, and there’s no doubt it’s deepened my understanding of the difficulties of Platt’s personal life as she was establishing and building her career in the ‘70s.

For those who don’t know this well-told story, a quick re-cap: Bogdanovich and Platt were married from 1962-1971. They spent the first few years of their marriage in New York, working in the theatre and organizing film exhibitions at places like the Museum of Modern Art. They then headed out to LA – Bogdanovich wrote film criticism for Esquire, and they became friendly with the likes of John Ford, Orson Welles, and Roger Corman, who hired Bogdanovich in 1967 to make Targets. Platt co-wrote that film and did production and costume design. The couple would go on to make three more films together – The Last Picture Show (1971), What’s Up, Doc? (1972), and Paper Moon (1973), all critical and commercial hits. Platt did production design and a host of other uncredited work on all three. The couple had two daughters, Antonia and Alexandra (or Toni and Sashy, as their parents called them). But in 1970, during production of Picture Show, Bogdanovich met and fell in love with Cybill Shepherd. The relationship progressed in stops and starts throughout ’71 until Bogdanovich finally left Platt for a seven-year relationship with Shepherd. Both of them continued to work throughout the decade and beyond, although (with one possible exception) they never worked together again.

These years are covered quite extensively, and sometimes in heart-breaking fashion, via correspondence between Platt and Bogdanovich. In her letters, she generally remains supportive of Bogdanovich’s work (some of which was hers as well), and seems resigned to the end of her marriage (Peter Biskind’s book Easy Riders, Raging Bulls describes Platt being ferociously angry during some of this period – understandably so – but that doesn’t really come through in these letters).

Then, as she does in most accounts of the decade, Platt virtually disappears. In the years between about ’75-’83, Platt shows up in the archives mainly in the form of earnings statements for money due her from Picture Show, Doc, and Paper Moon.

Then around ’83 she shows up again. I’ll speculate in a later piece about why this might be, but the short version is that Platt and Bogdanovich decided to redraft their custody agreement. Letters from each of them but also their lawyers start flying back and forth. Sometimes very angry letters, mostly about the girls who were, by now, fully into their teenage years. It’s probably worth noting that, by this point, Bogdanovich was still a huge name in Hollywood, but hadn’t had a hit film since Paper Moon. Platt, on the other hand, had been working steadily with one success after another, including having written the script for the scandalous but acclaimed Pretty Baby (1979). By 1983, she was working on Terms of Endearment, for which she would soon receive her only Academy Award nomination. So it’s intriguing, to say the least, that this year seems to be the one when tensions finally blow up between the two (of course, as a personal archive, this collection might be more than a little incomplete, but Bogdanovich seems to have been a pretty meticulous record keeper). 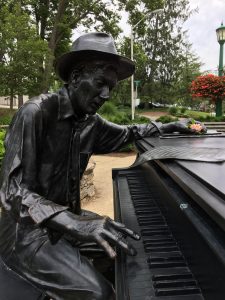 A statue of IU alum Hoagy Carmichael, who appeared in To Have and Have Not, directed by Bogdanovich favorite Howard Hawks.

All of this stuff is fascinating. If I were a Platt biographer, this would be gold. But for

somebody researching production studies and trying to engage in a bit of historiography, it’s mostly color. I love it, and it’s given me a richer understanding of the lives of these two complex individuals, but it’s color.

Having spent time in archives before this, I should’ve known better than to expect a smoking gun – what was I hoping for, a signed confessional from Bogdanovich that said, “you’re all right, Polly did everything!” Well, no, I wasn’t. But I had hoped to find a bit more about some of the specific decisions Platt made, or the uncredited roles she played. And of that, there’s very little.

I did come across an interesting note on Platt’s application for membership in the Art Directors Guild (Platt was the first ever woman member). As part of her application, Platt had to list her production design work, and in one line she writes: “DESIGNED SETS FOR O. WELLES 1971 IN CANADA (French release).” Now, I know from other sources that Platt worked as production designer on Welles’s never-released The Other Side of the Wind (this is the exception mentioned above, about Platt’s role on which little has been reported. See here for more). And I know from correspondence in the archives that at least some of that work took place in early ’71. But in Canada? As far as I know, Wind was shot primarily in Arizona and southern California. So either it’s a mistake, or there’s more to Wind’s production than I know, or Platt worked on an additional film with Welles.

I have come across some other helpful mentions, and I still have to go through most of the production boxes for the four films they worked on together, so who knows what I might unearth next week.

Hoooooowwwweever . . . this archive is chock full of amazing documents. Yes, I came for Platt material, and that’s where the focus of my attention will remain. But as a film scholar and fan I can’t help but getting excited about holding letters hand-written by Orson Welles or flipping through film treatments of projects that Bogdanovich labored over but then never made (like his long-in-the works The Streets of Laredo project with collaborator Larry McMurtry, which Bogdanovich was convinced John Ford killed out of spite, and which would later become Lonesome Dove). 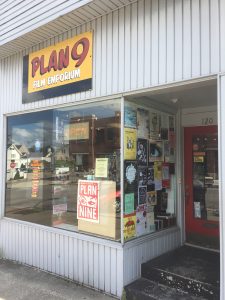 Just a few things I’ve come across that aren’t directly related to my research:

There’s over ten years correspondence between Bogdanovich and Welles, sometimes very active. They had a continuous stream of overlapping collaborative projects in the works (Bogdanovich is a monstrously busy and prodigious talent), and one thread of the letters covers the book This Is Orson Welles. This is a project that the two began working on in 1969 but that wouldn’t be published until 1992. Throughout the years each has excuses for not getting their portion of the book done on time (it was originally meant for ’71 publication), and at times they get very cross with each other. In fact, they get cross with each other a lot in general. Apparently, while hosting The Tonight Show in February of ’77, Welles made a few pointed comments about Bogdanovich that caused a flurry of acrimony and apology from both (still trying to find the episode or a transcript). And there is tons more Welles stuff that I may write about later, will definitely use in teaching.

A potential bombshell (well, depending on how one defines “bombshell”) comes in Cybill Shepherd’s copy of the Taxi Driver script. Almost every line of her character Betsy’s dialogue is rewritten in Bogdanovich’s hand. Never mind what this might say about Bogdanovich’s ego at the time (hey Marty and Paul, mind if I rewrite your script for my girlfriend?), which, to be fair, Bogdanovich was one of the biggest directors in Hollywood at the time, and Scorsese was still building the reputation that Taxi Driver would cement. What excites me is the potentially fascinating things this says about the development of one of ‘70s Hollywood’s greatest scripts (I don’t know the screenplay well enough to know if any of Bogdanovich’s suggestions were included in the final film – hoping my friend and fellow scholar Colin Tait can shed a bit of light on that!).

One last trove for now. After the horrific murder of his girlfriend Dorothy Stratten in 1980, Bogdanovich took nearly five years off from making films. He threw himself into the early-mid-‘80s anti-pornography movement and became active in violence against women organizations. The archives are full of documents like newsletters from Men Against Pornography (which Bogdanovich seems to have been a member of), the 1983 Annual Report from the Los Angeles Commission on Assaults Against Women, and a collection of clippings about actress Dominique Dunne, like Stratten the victim of a brutal murder at the hands of a jealous man. And this is closely related to the very public dispute that Bogdanovich was in engaged in with Hugh Hefner at the time (which, for a fairly contemporary account, see here). There’s even a letter from Bogdanovich’s daughter Antonia to Maryland’s Barbara Mikulski asking her to support an anti-pornography bill in the US Congress.

I’ve thoroughly enjoyed this first week in the archives. Bogdanovich’s career overlapped with those of so many others from Classical and New Hollywood, and his interest in Hollywood history runs so deep that reading through his papers is much like reading an in-depth personal history of the bridge from old to new in American cinema. The Welles material alone could probably form the basis of a fantastic script.

But I’m here for Polly. It would be a stretch to say she’s not here because she is. But in much the same fashion that she’s present in histories of the New Hollywood era – fleetingly, in snapshots and snatches. Much of what I’ve found so far has been exciting and informative. But like most of the history of women in Hollywood, it’s not enough. 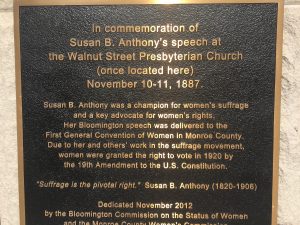