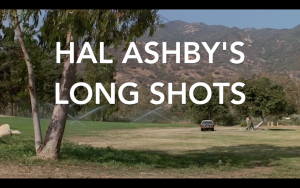 I’d been contemplating an audio-video essay on Hal Ashby and the long shot for ages. It should have been easy. I write about it in a section of my book, and I had ripped the clips I wanted to use based on the scenes I write about.

But I’m still fairly inexperienced at constructing such essays, and the problem I kept running up against was how to properly contextualize these long shots and their use in Ashby’s films as something both part of and counter to Hollywood tradition.

My first instinct was to incorporate voiceover to explain my thoughts. But I was worried this might be too pedantic. Wouldn’t a short, simple collection of shots, perhaps with an elegant frame or introduction, better convey their effectiveness? I couldn’t decide.

In the end, my friend Barry Cullen suggested, why not both? Barry’s a scholar and experimental sound practitioner whose work often elicits surprise by incorporating unpredictable elements. He said, try it both ways and see how the different sets of conditions produce different essays.

So I did. And here they are.

Take One is without voiceover. I’d already made a few such video essays in the past, so I thought it would be “easier.” I assembled clips that I’d written about before and cut them together in a way that seemed to flow best. To introduce them, I thought I’d use something Ashby said in an interview near the end of his career. When he’s asked about the influence of director William Wyler, one of his first mentors, on his own filmmaking, he mentions a particular long shot from The Best Years of Our Lives. I remember first coming across this interview in the Ashby archives in LA and being really pleased because it seemed to imply that Ashby had been thinking about the power of the long shot since early in his career.*

I ended up intercutting text of the quotation with the shot itself. I’m not sure how effective it is – it might be too long an intro – but Ashby was right that it’s a powerful shot.

The other decision I made that affected Take One was the music. I considered using something upbeat, some rock – after all, Ashby’s films are loaded with ‘60s and ‘70s rock music. But even the folkier rock I tried didn’t seem to fit. In the end, I went with Johnny Mandel’s sparse piano theme from Being There, an elegant piece that reinforces the power of the shots. This created a few restraints. The major one being the music lasts just a little over two minutes, and I had about three and a half minutes of clips. This provided a fantastic opportunity to practice “trimming the fat,” and really paring each clip down to its essential few moments.

The second, less demanding restraint comes from the way Mandel’s piece, as short and reserved as it is, includes a few moments of more dramatic intensity. I spent more time than I probably should have trying to get these moments to correspond with what was happening on screen.

In the end, while I’m not sure how well Take One conveys what I find so intriguing about Ashby’s use of the long shot, it’s a short, reflective piece that, at the least, is nice to look at.

Take Two is the voiceover version. At first I thought this would give me a bit more freedom – because it would be somewhat “explanatory,” I would have more leeway with shot length and selection. This proved true in ways that I hadn’t expected. Once I had the voiceover track done, and edited as tightly as I could get it, I was still looking at something close to five minutes – much longer than the three and a half minutes of footage I’d originally assembled. I was worried not only that the final video essay would be too long, but that I might not have enough scenes.

In the end this proved to be a blessing because it allowed me to incorporate clips from Ashby’s lesser-known ‘80s films. These movies all have their various problems – which is why they are often ignored by critics – but they all include hallmarks of Ashby’s ‘70s work, so I was happy to be able to include them.

The other effect of the voiceover’s length was that the Wyler clip just wasn’t long enough to serve as an introduction. This resulted in what is probably the biggest difference between the two versions, my decision to contextualize the long shots with a comparison to some famous Hollywood close-ups.

In some ways, this works better than the Wyler introduction because it acts as a counterpoint to what I find intriguing about Ashby’s use of the long shot.

Two other quick points. I reduced the title size in the Take Two because, with the voiceover announcing many of the films, the screen-wide titles seemed redundant.

Also, I learned that when recording voiceover tracks, it’s a very good idea to take precise notes about recording location, audio settings, etc. (my sound friends are, like, duh!). I didn’t do it this time around, and when I went back to try and record some additional voice tracks, I simply couldn’t get the sound comparable with the first go.

In the end, I’m not sure how well either of these audio-video essays gets to the heart of what I find so fascinating about Ashby’s choice to use the long shot in these instances. But the process of putting them together was certainly a useful education into the unexpected outcomes that can result simply through one’s choice of tools.

*Ashby’s interview on Wyler was unpublished for many years, but can now be found in Nick Dawson’s Hal Ashby: Interviews, published in 2010 by UP Mississippi.