The Other Side of the Director:
Polly Platt and Orson Welles’s Last Movie 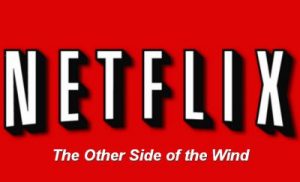 Recent film and media news has been filled with excitement at the announcement that Netflix has acquired the rights to Orson Welles’s final, unfinished film project, The Other Side of the Wind. And rightly so! Wind was a labor of love that Welles worked on for over half a decade. From the clips that have been circulating for years and in-depth descriptions of the film by the likes of Josh Karp and Joseph McBride, it sounds like a fascinating endeavor: an ode to the life of a late-career movie director; a spoof of both pretentious art cinema and the rise of New Hollywood; a decades-in-the-making dig at Ernest Hemingway. The film seems like yet another radical departure for Welles. A gloriously shot film-within-the-film combined with a rapidly edited montage of shaky black-and-white footage, Wind has the potential to be a final great film from one of America’s foremost moviemakers.

And so the sense of excitement and anticipation that seethes from every write-up is understandable – I certainly share it!

Yet, as readers of this blog might guess, coverage of the film’s impending release interests me for other reasons as well.

First off, as should surprise nobody, the promotion and publicity around the film’s acquisition by Netflix has been entirely auteurist in nature. It goes without saying that Welles (along, perhaps, with Hitchcock and Kubrick) is the preeminent figure of American auteurism. His pre-cinema career in theatre and radio, the profound impact of Citizen Kane, and his very troubled post-Kane career (often framed as a genius-David vs. evil-suits-Goliath tale) work together to construct an image of the quintessential singular creative talent. Welles and Kane likely top the lists of most written about filmmaker, most written about film, and most taught film in cinema classes around the world.

In short, Orson Welles IS an auteur! 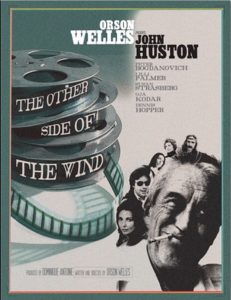 In my own experience, trying to develop an alternative approach to Hollywood history and production, Welles is the name I most often run up against. I’ll carefully and deliberately lay out my arguments for a multiple-authorship approach, and even the most skeptical listener will nod in agreement and then say something like, “yeah, that all makes sense . . . but what about Welles? Surely, he was an auteur!” This though there are repeated accounts (some even from Welles himself) that he genuinely relied on and celebrated the key creative inputs of his collaborators.

Hell, we can discount Pauline Kael’s Citizen Kane book entirely, and we still have Robert Carringer’s meticulously researched The Making of Citizen Kane and its sound arguments for Herman Mankiewicz’s, Gregg Toland’s, and Perry Ferguson’s authorial contributions to the film (for more on this, see my two-part post on the auteur paradigm, here and here).

And yet Welles’s reputation as a singular genius persists. It’s so intimately wedded to an intricately layered Hollywood mythology about art vs. commerce, genius vs. pedestrianism, individual vs. machine, that it may never be scuppered.

Thus it makes total sense that publicity around Wind’s new lease on life would tap into that mythology, even as the film itself – by nearly every account – seems to have been a highly collaborative affair.

Which leads me to my second point. Aside from Welles, few others involved with the film are mentioned in the recent flurry of write-ups about it. Most frequently is John Huston, Welles’s contemporary director-actor, who plays the aging director and who shared with Welles a friendship with Hemingway. Peter Bogdanovich also makes a regular appearance. Bogdanovich acted in the film, playing a character very much modeled on, but also spoofing, Bogdanovich himself – a burgeoning ‘70s directing star who’s also a bit of a sycophant to Huston’s director. He has also played a key behind-the-scenes role in finally bringing the film to light.

In fact, the photo most likely to accompany an article on Wind (and which comes up tops in a Google image search) is one like this: 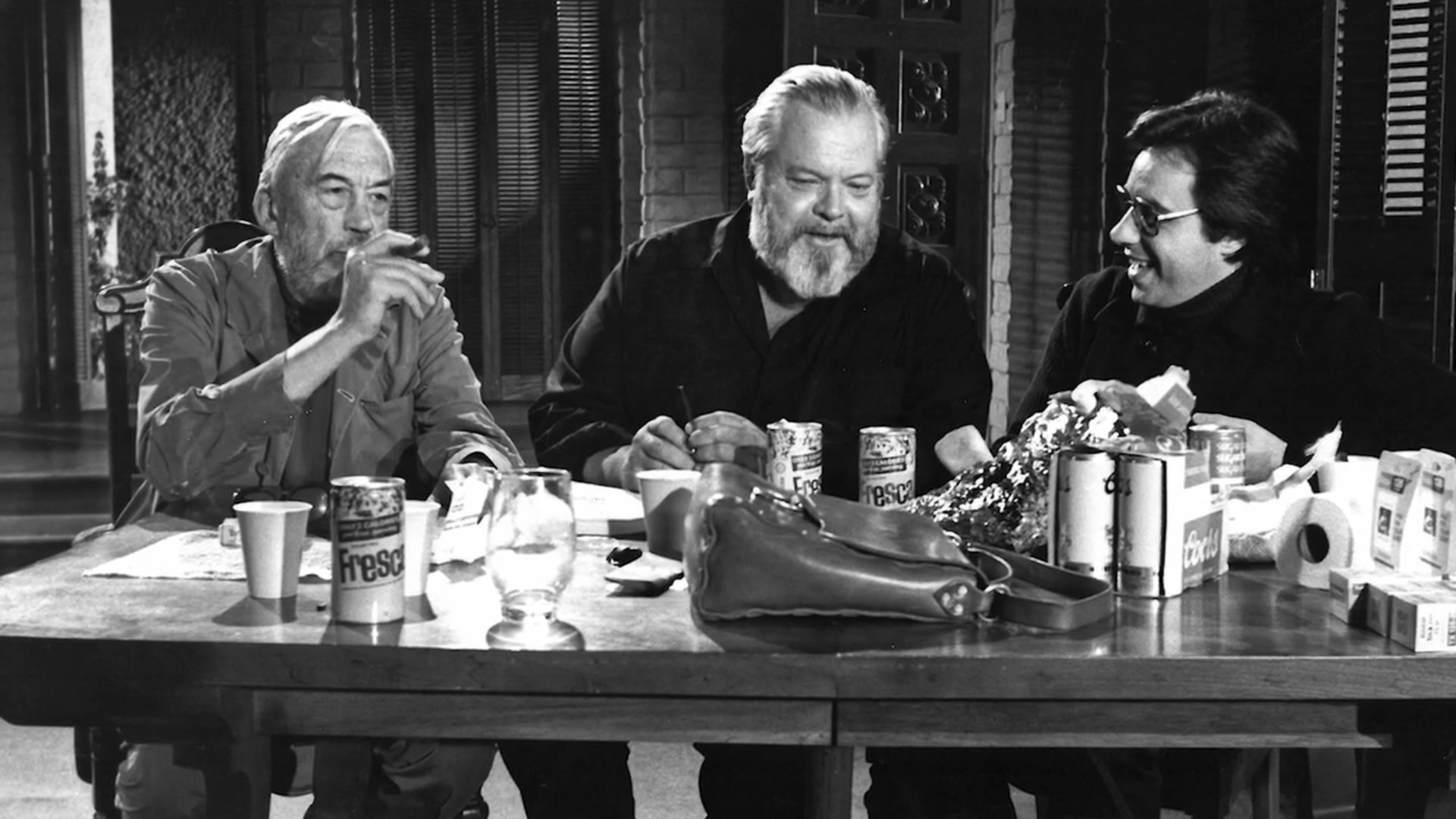 John Huston, Orson Welles, and Peter Bogdanovich on the set of The Other Side of the Wind

You can hear it screaming, “Look at these auteurs!”

Less frequently mentioned, but still making semi-regular appearances, is Frank Marshall. Marshall is a Hollywood mega-producer with hits ranging from a ton of Speilberg films to The Sixth Sense and the Bourne franchise (he’s also the husband of Kathleen Kennedy, one of the most powerful producers of Hollywood’s last three decades). Early in Marshall’s career, before he started producing, he was a bit of a jack-of-all-trades: production assistant, location manager, and bit actor, including working on several of Bogdanovich’s ‘70s films. On Wind he’s credited as production manager during the original shoots, a role that would rarely merit inclusion in a write-up about a film like Wind by a director of Welles’s stature. But Marshall has spent the last 40 years not only becoming a top-notch Hollywood producer, but also fighting to bring Wind out, and he’s now one of the Netflix-backed project’s actual producers. So, included he is.

Frank Marshall, clapboard in hand, on the set of The Other Side of the Wind

Of most interest to me, though, is the case of Polly Platt, whose participation in the film’s production has been all but erased from the historical record. Platt came on board after the production had started, but early in the process. Up to her arrival, Welles had been working without any sort of production designer or manager, and many of the tasks had been left up to cinematographer Gary Graver, demands upon whose time were increasingly preventing him from his work as DP.

So Welles called Platt, whom he had known for some time. Apparently the call had to be somewhat delicate, as Welles was close with Bogdanovich, and he called Platt while their breakup (and Bogdanovich’s leaving her for Cybill Shepherd) still lingered as recent history. He pitched the job as a good way for her to move on (a bit perverse on Welles’s part, as he had also cast Bogdanovich in the film!).

Platt joined Welles where he was shooting in the Arizona desert,* and she brought along her good friend Frank Marshall. By all accounts, both would remain committed to the project for the rest of production, even while taking on other work.

It’s difficult to discern just what Platt brought to the film – aside from Marshall, and some other key hires. Elsewhere, I have established that Platt had an authoritative style of design – interiors, exteriors, costumes – and that she had developed a keenly imaginative approach to narrative. The two combined meant that most films she worked on married the visual and the narrative in subtle, often fascinating ways that leant them layers of depth.

Did she bring that same knack for visual poetry to Wind? It’s hard to say. Everything about the film’s production is described as full-on Wellesian venture, with occasional kudos going to Huston, Bogdanovich, and, to a lesser extent, Graver. Platt herself is virtually wiped away from the history of the film’s production. Aside from one or two anecdotes, what she actually did for the film is shrouded in . . . well, not history, but ignorance – in the sense that she’s been virtually ignored.

Platt was briefly cast in the role of Juliette Riche, a cynical film critic apparently based on Pauline Kael. But she was replaced by Susan Strasberg and all her scenes re-shot. This anecdote seems to amuse historians of the film as another bit of Wellesian hi-jinks, casting Platt in a film with her recently estranged husband. So not only are her possibly significant contributions to the film ignored almost completely, when she is mentioned it’s almost as the butt of a joke.

(If available, this is where I would insert a production still of Platt working on the film, or a cast photo of Platt as Riche. Sadly, as far as I can tell, no such photo exists.)

As I said at the top, it should surprise nobody that a “new” film by Orson Welles would be treated in any way other than as a last great endeavor by one of cinema’s quintessential auteurs. This is the auteur paradigm working in high gear, celebrating one of its foundational models. This is how we view Hollywood history, after all, how we determine greatness. And there is no doubt that Orson Welles was a great director – an ingenious filmmaker with a deep, thorough knowledge of the craft, unafraid to take risks, who dedicated his life to his art.

But he existed as such within an art form that was highly collaborative, and it had been demonstrated time and again how Welles’s films benefitted from the multiple voices and visions of his collaborators.

Polly Platt’s near exclusion from the story of The Other Side of the Wind is an example not only of how the auteur paradigm continues as the dominant model of Hollywood historicizing, but also how that model continues to marginalize the creativity and labor of so many women.

*If any reader has any information on how much Welles’s remote Arizona home may have influenced Platt’s design of a like getaway in A Star is Born, I would love to have a look at it.

This entry was posted in Women and New Hollywood and tagged Aaron Hunter, Auteur Paradigm, Frank Marshall, Netflix, Orson Welles, Peter Bogdanovich, polly platt, The Other Side of the Wind. Bookmark the permalink.