The Thief Who Came to Dinner: Design by Polly Platt 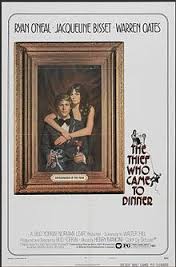 I recently watched The Thief Who Came to Dinner for the first time. This 1973 film was written by the great Walter Hill (and it’s got the punchy script to show for it), directed by an unsung Bud Yorkin,* and stars Ryan O’Neal, Jacqueline Bisset, and Warren Oats. It’s also got a great performance by Ned Beatty, and some sound supporting work by Jill Clayburgh, John Hillerman, Gregory Sierra, and the always wonderful Austin Pendleton as a frustrated chess master trying to outwit O’Neal’s cat burglar through a game of correspondence chess. There’s even a brief appearance by Michael Murphy in the film’s opening scenes. In other words, a killer’s row of great ‘70s talent.

It also features a funky Henry Mancini score, and some occasionally brilliant cinematography by Philip H. Lathrop, who mostly shot comedies like The Pink Panther and I Love You, Alice B. Toklas, but also did some thrilling work on films like The Cincinnati Kid and Point Blank. The experience of shooting a mix of comedy and action serves him well in this sexy comedic thriller.

But I watched the film** mainly because the production design and (uncredited) costume design is by Polly Platt. Platt’s work in New Hollywood cinema is my case study for the first year of this project. I’ve written elsewhere about her work with Peter Bogdanovich – Platt did production design, writing (sometimes credited, often not), and uncredited costume design and location scouting for Bogdanovich’s first four, highly celebrated films: Targets (1968), The Last Picture Show (1971), What’s Up, Doc? (1972), and Paper Moon (1973).

The Bogdanovich films have been written about extensively since their release. Furthermore, the DVDs of all four films include a variety of special features, including director’s commentaries, and Bogdanovich is quite open about how much input Platt had into the making of the films. The Thief Who Came to Dinner, on the other hand, has benefitted from very little commentary – scholarly, critical, or otherwise – so determining the precise nature of Platt’s input involves a fair bit of deduction.

Thief is Platt’s first project away from Bogdanovich (it was released in March of ’72, two months before Paper Moon, Platt’s final picture with Bogdanovich). It’s difficult to say just how much of the production work is Platt’s own design and how much of it preexisted in the many Houston location sets that were used for the film. It’s also difficult to ascertain how much location scouting Platt did, and how much influence she had in moving the film’s location to Texas (the source novel is set in Chicago).

We do know a few things, though.

What’s Up, Doc? – the shady hideout that Platt found on the SF docks.

The Last Picture Show: Platt redressed all the storefronts for a ’50s look and feel. 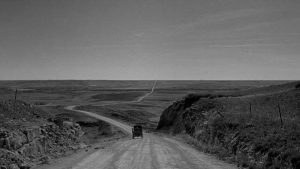 Paper Moon: the “only” hill in Kansas.

On his films, Bogdanovich credited Platt with much of the location work – including joining him on scouting much of San Francisco for What’s Up, Doc?, helping locate the town where Last Picture Show was shot (which is a whole funny story on its own), and finding “the only hill in Kansas” for the final shot of Paper Moon. In fact, it was Platt’s decision to move the setting of PM from the Alabama of the source material (the novel Addie Pray) to Kansas and Missouri.

Frank Marshall is listed as Location Manager for Thief. Marshall was a friend of Bogdanovich and Platt who got his start in production on Targets, and who worked in some capacity on several Bogdanovich films, including all four that Platt worked on – the two knew each other well and were used to working together.

Thief also shares the earlier films’ propensity to let the design and mise-en-scène to add nuance to key narrative and character developments, through its use of color schemes and its contrast between scenes of opulence and dereliction.

With all this in mind, and until I can perform more in-depth research on Platt’s specific role at a few archival visits over the next two years, I’m going to go ahead and credit Platt with having made the key design decisions for the film. It fits her m.o. as a production designer, and there are just too many similarities to chalk it up to coincidence.

Platt’s design on The Thief Who Came to Dinner

For the purposes of keeping this entry’s length relatively manageable, I’m going to focus on two components of Platt’s production design (and very little on costume), both of which relate somewhat to elements I’ve discussed about her work with Bogdanovich. First of all, and very briefly, is her use of color.

Platt has a fantastic sense of color and its potential for conveying psychological information, and throughout her career she continues to show a knack for working really well with cinematographers for deploying colors whose shadings and gradations change in different lights.

With Thief, I’d just like to point out a few uses of the color green in the film. It’s the film’s most prominent color, and at the risk of sounding a little bit Film 101, there’s a pretty good argument to be made that the color’s relationship to money (at least in a US context) is an important factor in its use in the film.

We get the first vibrant use of green when Webster (O’Neal) is scouting the house that will be the site of his first heist and he passes through a hall with a grand spiral staircase: 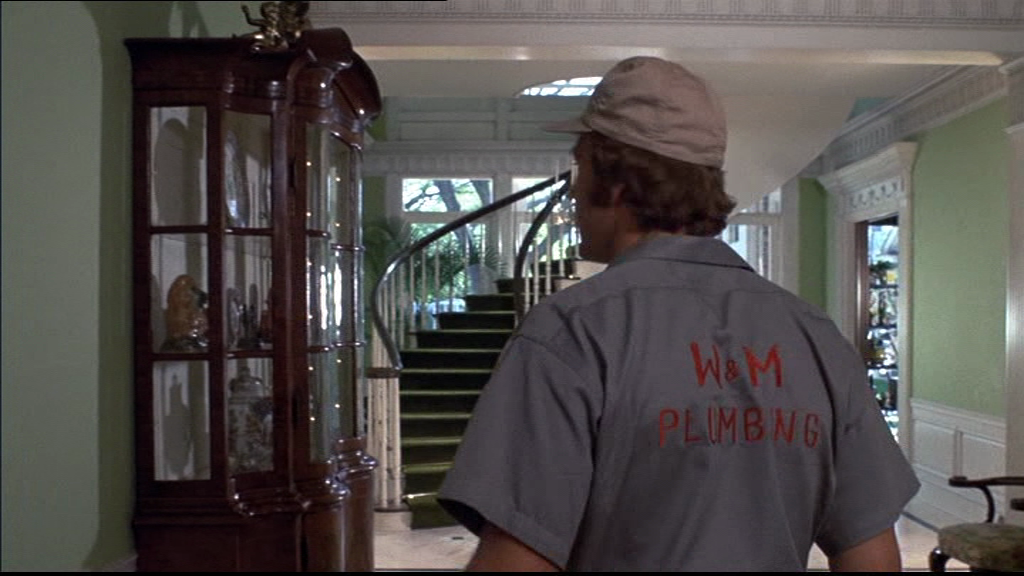 He next passes through a more dimly lit green room whose opulence is reinforced by the furnishings: silver framed mirrors, ornate candle holders, etc.: 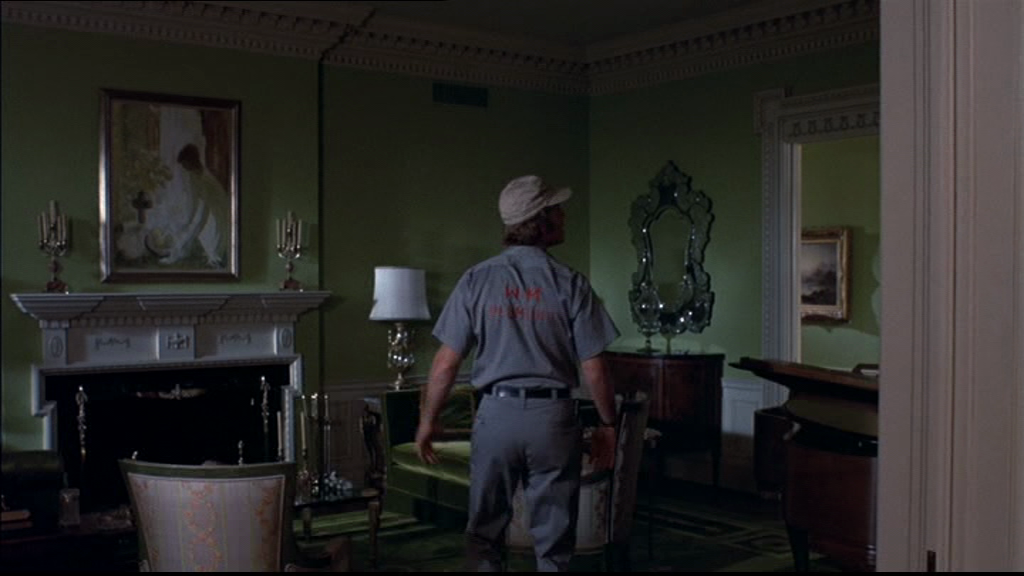 Finally, he enters the greenest room of all, a sort of conservatory whose intense green furniture and drapes is accentuated by the lush green exteriors: 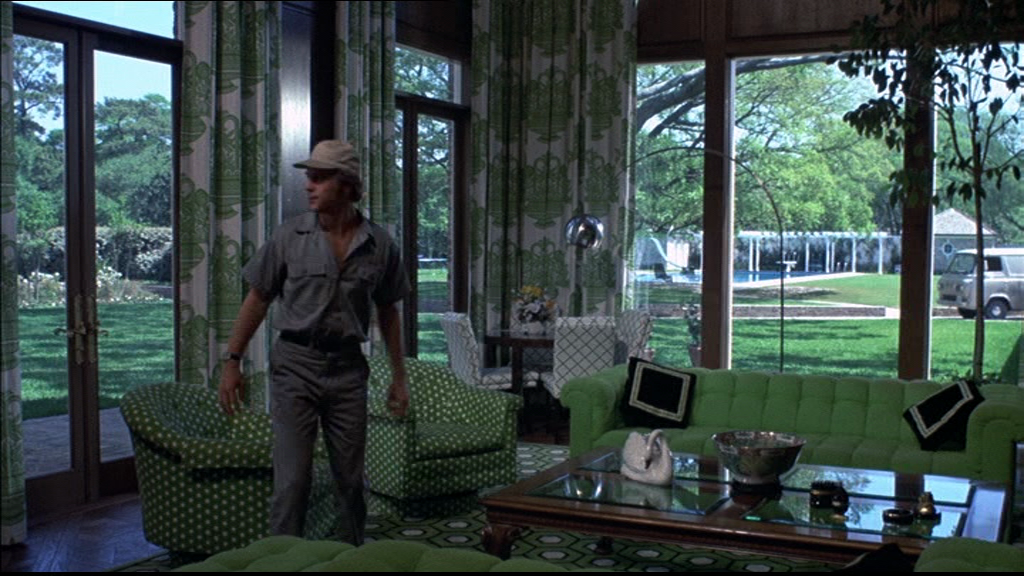 It’s worth pointing out that these are not the only rooms in the house that Webster passes through – there are browns and blues and oranges as well. But the prominent use of such bright green will become recurrent throughout the film. And to feature it so dramatically at the site of Webster’s first mark is important for another reason. After Webster robs this house, he’s not content to keep the money and jewels, but he uses confidential information he finds to blackmail the house’s owner, Mr. Henderling (Charles Cioffi), into introducing him to his well-moneyed friends, Webster’s future victims: 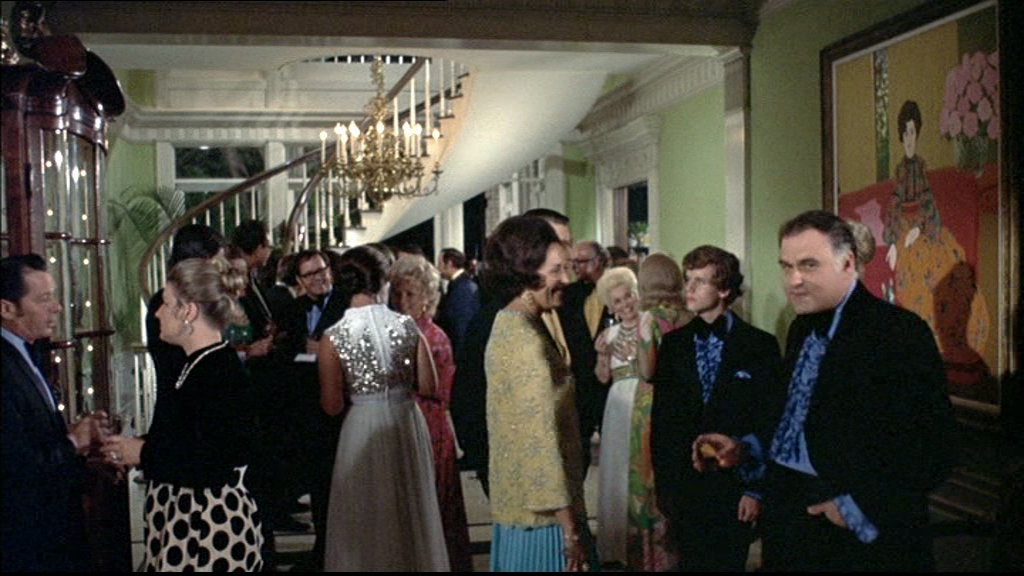 So this first house is not only an opportunity for Webster to make some money and practice his skills, it’s actually a gateway into a world of wealth. The gateway metaphor is reinforced when Webster first meets Laura (Bisset) at a party thrown by Henderling. Laura is a wealthy socialite who is a bit down on her luck financially, but whose presence in Webster’s life (they fall in love about as fast as any movie couple ever has!) will provide him with greater access to purloinable riches and a willing accomplice in his crimes. The first shots of Laura frame her at a bar – the room she’s standing in is dark brown, but the background of the bar, seen through a window, is again bright green. As such, visually, Laura is positioned as a gatekeeper: 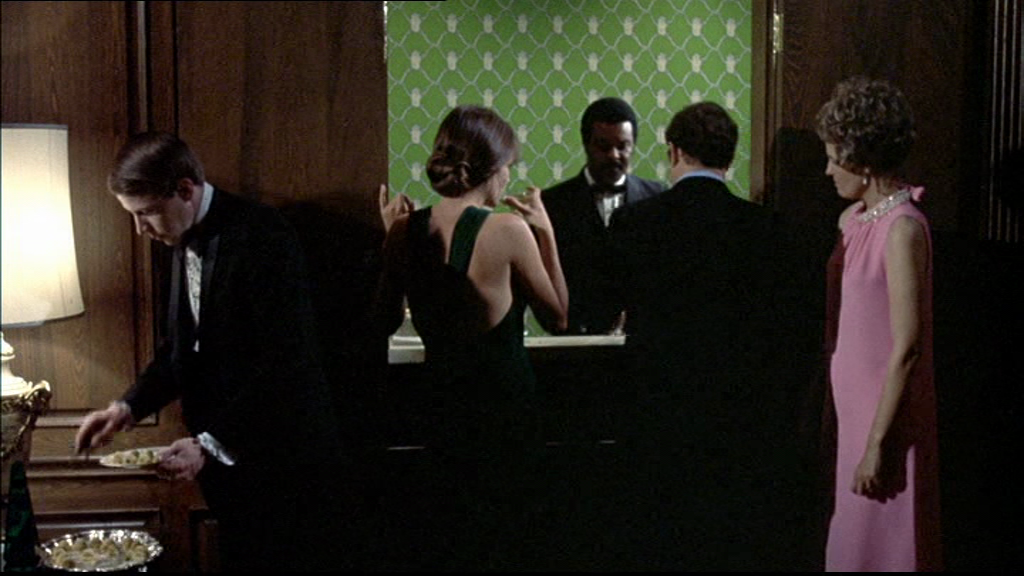 The Thief Who Came to Dinner: first appearance of Bisset’s Laura. 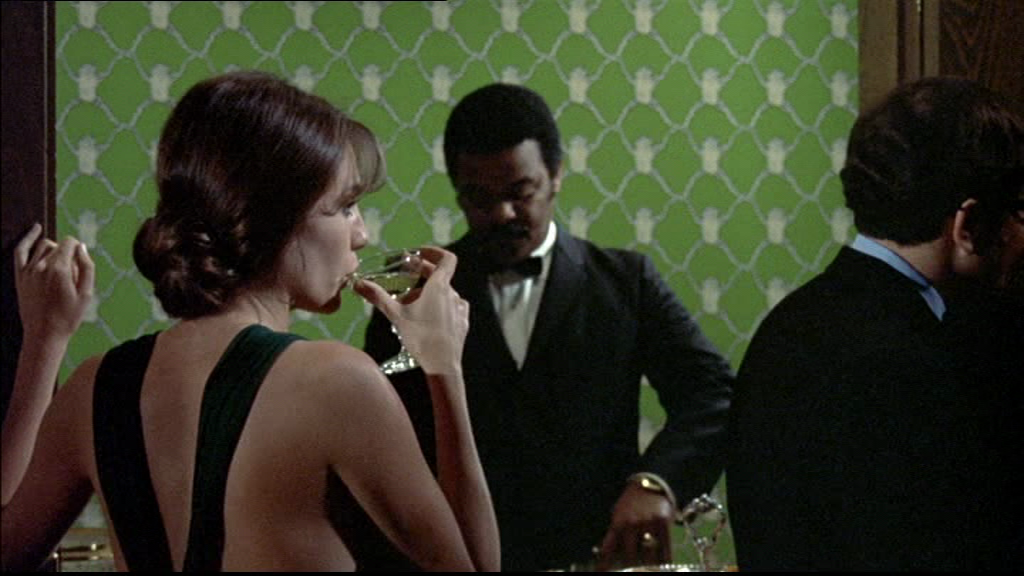 The Thief Who Came to Dinner: closer shot of Laura’s first appearance.

This image is somewhat of a mirage, as we soon discover that while Laura remains on good terms with Houston’s wealthy set, she’s lost most of her own fortune. This is demonstrated not just by the use of color in her house, but its décor. Laura lives in what would likely be considered a fashionable, modern house (for 1971), but while its design is funky and hip, the house is bereft of furniture: 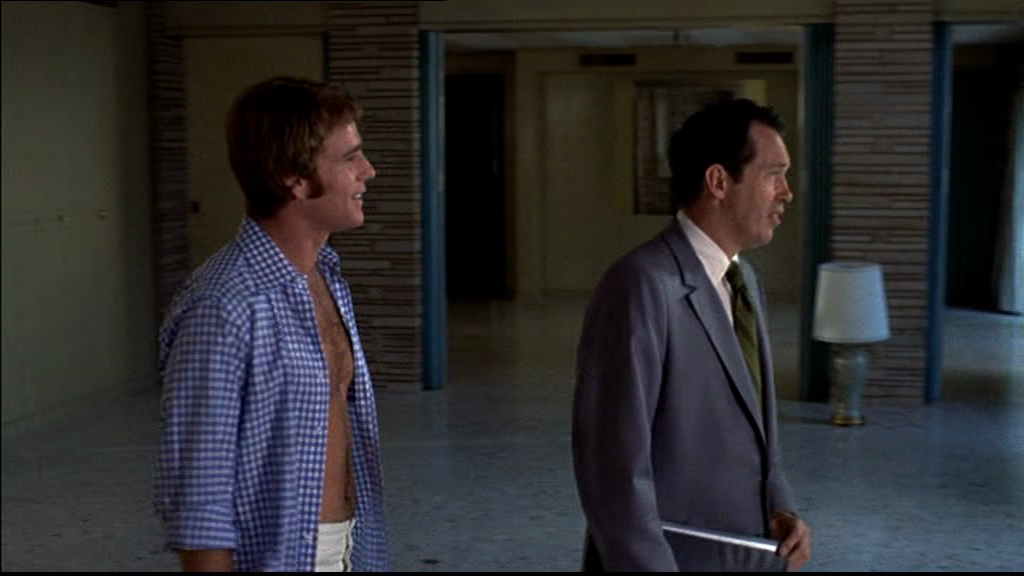 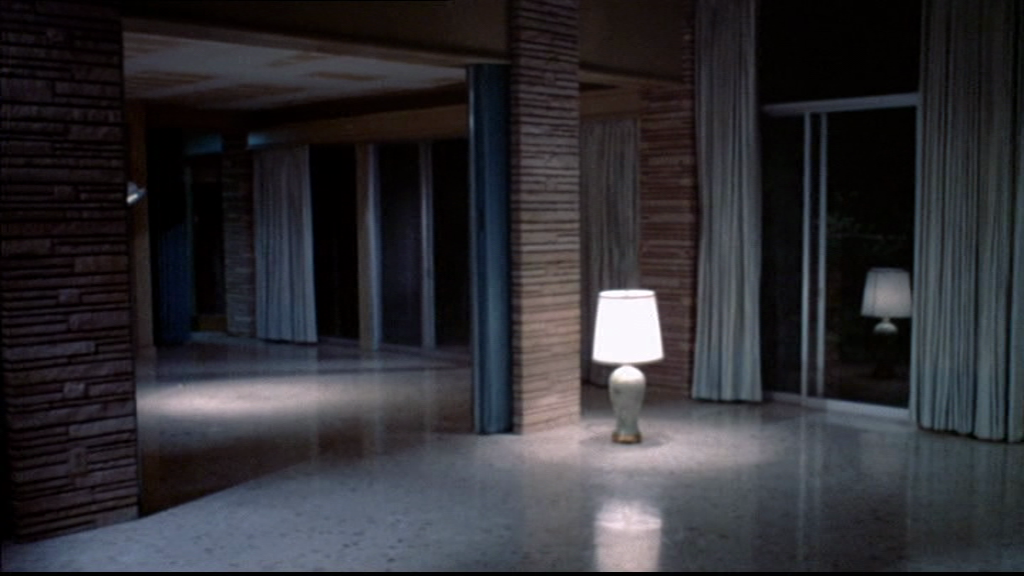 the swimming pool is empty of water: 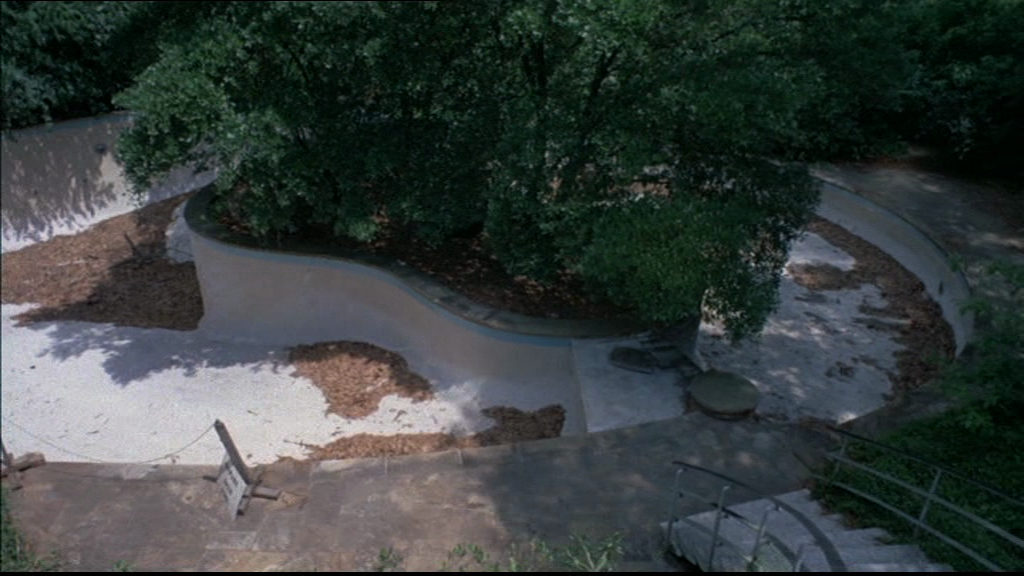 and the only green to be spotted is through windows and doors to the overgrown garden outside: 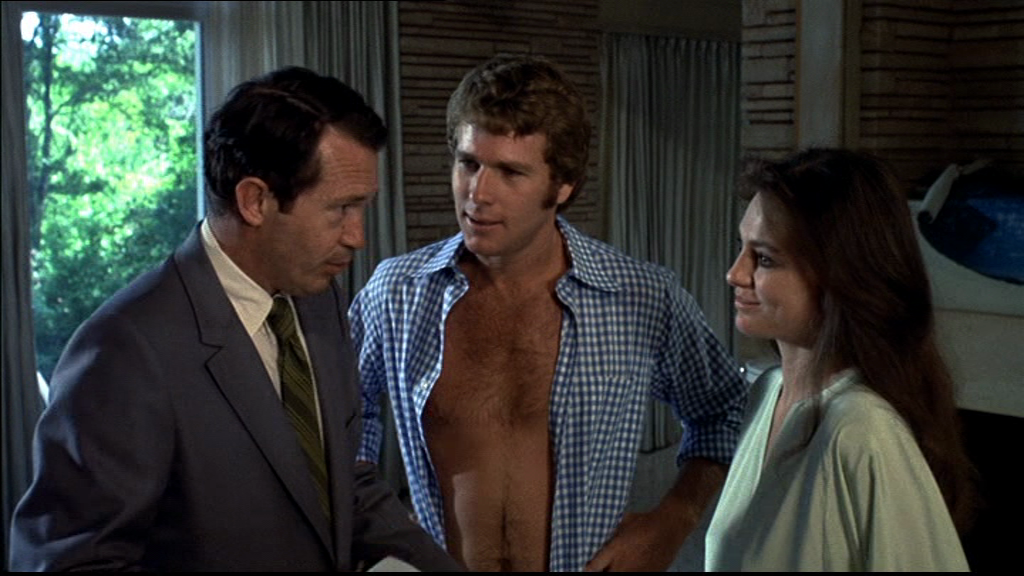 Thief: Laura’s house with a patch of green visible out the window.

The design choices here are vital to understanding character motivation. Laura is presented, off the bat, as a woman who chooses to live a bit on the wild side, but even still it would be hard to believe how quickly she accepts Webster’s thievery if her own straightened circumstances were not presented so starkly.

And speaking of stark surroundings, the one last bit of production design – more related to location scouting – is the way Webster always meets his fences in dilapidated parts of town – a rundown old drive-in movie lot: 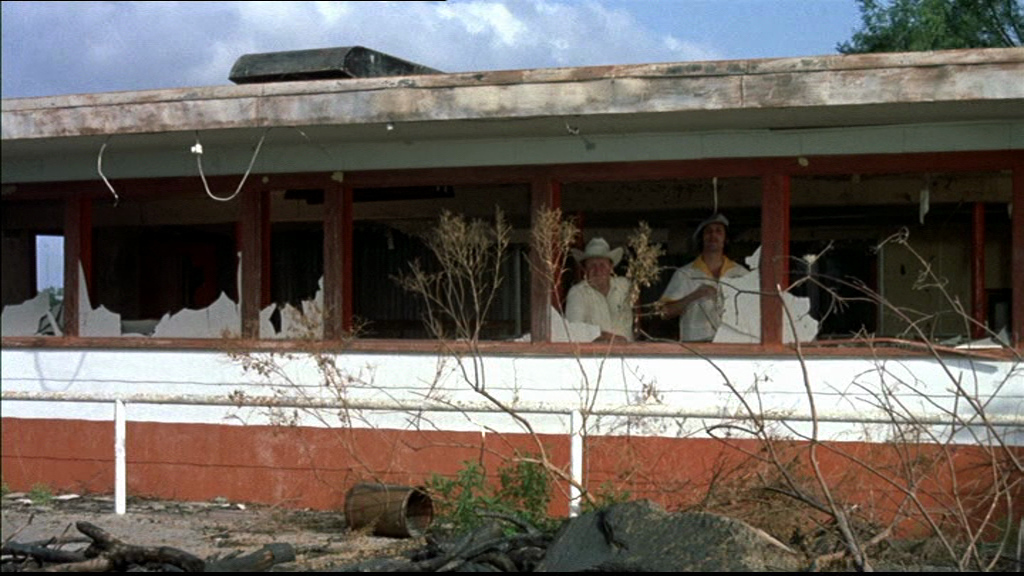 a pile of rubble under a bridge: 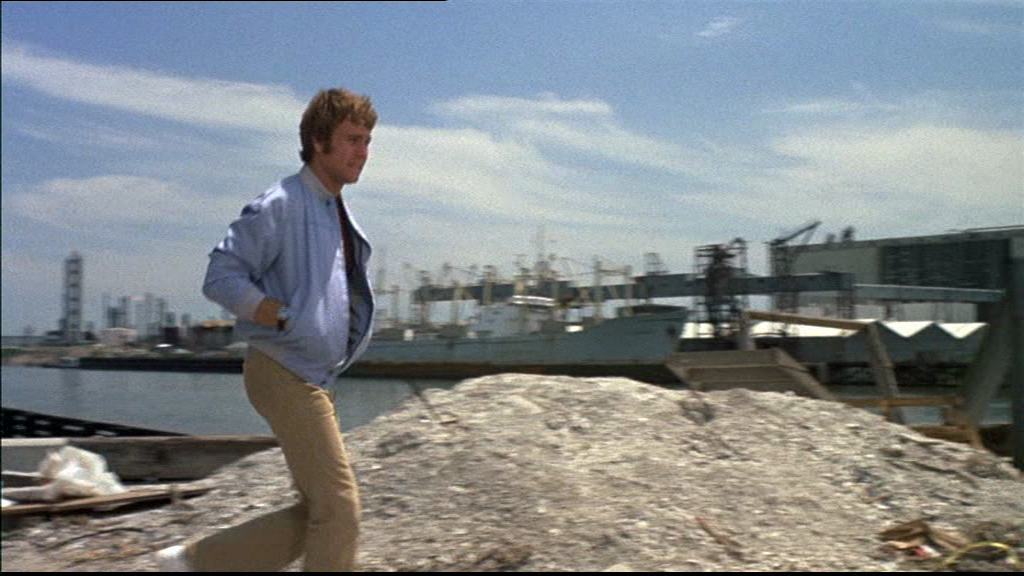 a dark, dingy auto chop shop (and notice the color of the car Webster’s picking up for one of his big heists): 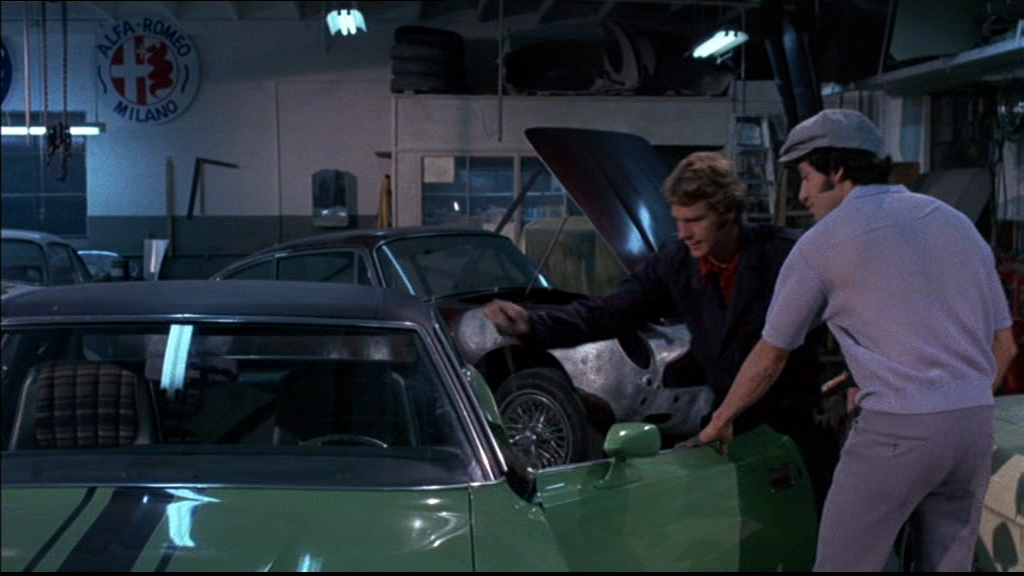 Contrasting locations of this type is not necessarily novel – Hollywood has long had its glamorous criminals move between the seedy and the high society. But with the addition of Laura’s house, we get three typical locales: the world of the lavish rich that Webster hopes to enter and that Laura hopes to rejoin; the intermediary world that appears wealthy on the surface, but masks an empty way station where Webster and Laura are trapped; and the desolate, run-down scenes of criminal activity that Webster hopes to be able to leave behind after his “one big score.”

The Thief Who Came to Dinner is a slight movie. It’s fun, sexy in spots, with some deft plotting and sharp dialogue. But even a tap at the surface reveals not much beneath it all. Part of what makes it work as well as it does are the imaginative ways that Platt’s production design work to further narrative and character development, only a few of which I’ve outlined here. And as these choices bear striking resemblance to Platt’s design work in her earlier films, it seems safe to say that as a production designer, by this point in her career she has developed a personal approach to crafting a mise-en-scène that not only creates a realist setting, but also adds nuance to narrative and character. As such, Platt can be viewed as one of the authors of The Thief Who Came to Dinner.

*It would be hard to argue that Yorkin is an over-looked genius of filmmaking, with a few comedy thrillers under his belt, but as one half of Tandem productions, his contributions to US television (All in the Family, Maude, Sanford and Son) are often overlooked in favor of his better-known collaborator Norman Lear.

**The film is pretty tough to track down. I found a Spanish-language DVD online that, thankfully, still included an English track (I’ve purchased foreign DVDs before with the English completely removed). The DVD cover is clearly a photocopy, and my machine reads the disc as Quantum Leap, Season 3, Disc 4.