One More Reason Women in Hollywood Can’t Catch a Break

Both articles are great reads with worthy intentions. I don’t mean to be overly critical of them here, but I would like to point out just a few of the ways in which their efforts to highlight flaws in Hollywood and Hollywood history might also enable the system that includes those flaws as structural components.

In short, both articles perpetuate the auteur paradigm. 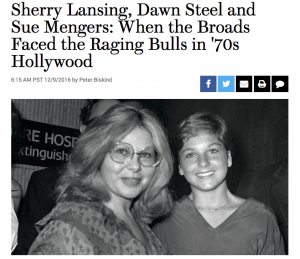 Biskind’s is a detailed account of some of the very vital work done by women agents, producers, and executives in the 1970s (which, I wish he had given a bit more thought to the decision to call them “broads” in the title). This is fantastic. As I’ve pointed out elsewhere, ‘70s Hollywood saw an explosion of women’s talent unlike anything that had come before. And, as Biskind rightly points out, while little of that talent was given the opportunity to flourish in a director’s role, women took up almost every other conceivable position in Hollywood by the end of the decade (with the notable exception of cinematography, a role where, both historically and today, access for women has been even more dramatically limited than directing).

Biskind does excellent work highlighting how tough it was for women to be taken seriously as executives and how hard they had to fight to have their work valued. The article also highlights two key changes that their determination wrought: as dealmakers they began to make a serious impact on shaping the landscape of Hollywood filmmaking; and as feminist pioneers they began the very hard work of making Hollywood a fairer place for women (a struggle that continues to this day, which more in a moment). These stories need to be more firmly embedded in general accounts of Hollywood history.

But the article also inadvertently highlights the grip that auteurism continues to have on conceptions of how Hollywood works. Biskind laments that despite all these advances, women were not allowed to direct. This is a worthy lament, but maybe not for the reasons Biskind and (some of his interviewees) imagine. Women weren’t allowed to direct because Hollywood in the 1970s was sexist, no doubt, because the US was still unbelievably sexist. But there’s something more insidious at work. Biskind writes:

Improbably, it would be easier to become a producer or even a studio head than it was to direct.

But if one understands the function of the auteur paradigm, it’s not improbable at all. Hollywood and America in general were slowly becoming accustomed to women in positions of power. But it what it couldn’t abide, and still tries hard not to, is women in positions of creative power and ownership. The auteur paradigm tells us that the director is the artist, the genius, and it’s the idea of women taking up that role that is still being resisted (which might also partially account for why Biskind’s article has so little to say about the many creative non-directing jobs women were doing in Hollywood at the time – because the auteur paradigm discounts the creativity of that labor).

One of the women who both benefitted from the original ‘70s executive trailblazers and has been a trailblazer herself is Kathleen Kennedy, who broke into the business in the early ‘80s just when the subjects of Biskind’s piece were reaching the apex of their power. Kennedy spent much of the ‘80s and ‘90s as a head of Amblin with Speilberg and served as a producer on most of his films. Since 2012 she has run Lucasfilm for Disney, arguably the highest profile gig in Hollywood at the moment.

In a recent interview with Variety, Kennedy was asked about the possibility of a woman directing a Star Wars film anytime soon, and she responded: “We want to make sure that when we bring a female director in to do Star Wars, they’re set up for success. They’re gigantic films, and you can’t come into them with essentially no experience.” 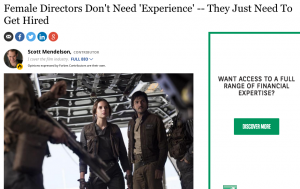 Mendelson’s article (which should be read in full) dismantles the hypocrisy inherent in Kennedy’s statement by unearthing multiple detailed examples of how Hollywood is fine handing the reins of blockbuster directing to inexperienced males, while at the same time withholding such films from female directors regardless of their experience and also punishing highly experienced female directors for any misstep (hello, Elaine May!).

It’s an excellent takedown of the notion that women “just aren’t ready” to direct Star Wars or other blockbusters. But it’s also, yet again, an example of how pervasive the auteur paradigm is. First of all, it shows how very little things have changed since the ‘70s that Biskind writes about.

Female directors don’t need mentoring or grooming. They just need to get hired with the expectation that they will deliver at least as much as their male peers. Anything else is just a band-aid on a gaping head wound.

Secondly, that the statement came from one of Hollywood’s most powerful women demonstrates how firmly entrenched the idea of male creativity is. Statistics and examples repeatedly demonstrate the kind of incredible work women directors do on films of any scale, and yet Kennedy still buys into this conservative, patriarchal idea about talent.

Finally, and I’m happy to say this again, it’s an excellent article, but it’s mainly a factual account with little analysis undergirding it. Yes, it’s important to keep shouting loudly about the inconsistencies and injustices of Hollywood sexism. But until we really analyze and understand the underlying structures that make it so easy to perpetuate those injustices, the end result will remain, as Mendelson points out, “mostly just more talk.”