As I’ve begun to discuss this project with friends and colleagues, one of the questions that regularly comes up is, why New Hollywood? What specifically about this era and the way it accommodated (or didn’t!) women’s work and creativity has drawn me to spend two years researching it. So I thought I’d use this entry to offer a few thoughts about why I think Women in New Hollywood is a topic not only ripe for further exploration, but one necessary to a better understanding of how Hollywood continues to treat women and their work today.

First, a few definitions and clarifications of terms. Most of this is pretty well known to films scholars and buffs alike, but it’s always worth establishing some firm ground before attempting to build new scaffolding! 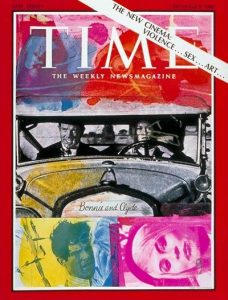 New Hollywood (NH) is an era that encompasses roughly 1967-1980. While most scholars agree on the start date – 1967 saw the release of both Bonnie and Clyde and The Graduate – there is a fair amount of disagreement over when the era ended. This is mainly due to how scholars interpret such issues as studio reaction to the era’s films, studio realignment in the face of heavy conglomeration, and the dramatic impact of the rise of the blockbuster in the wake of Jaws, Star Wars, and Close Encounters of the Third Kind. For example, Peter Lev argues that NH really ended around 1972 with the rise of such reactionary fair as The French Connection and Dirty Harry. Whereas scholars such as Peter Kramer have the blockbusters of ’75-’77 lowering the curtain on NH.

I take a more expansive view that has NH ending in 1980 because this allows for a late-70s era of transition that includes such films as Days of Heaven, Apocalypse Now, Being There, and Raging Bull. This also allows for consideration of such important “failures” as Sorcerer, New York, New York, and Heaven’s Gate.

Questions around the rise of NH – what it was, how it came about and flourished, and who benefitted most from it – are far too numerous to answer within the scope of this blog entry (I’m happy to expand in the comments), but it is worth pointing out a few key details as they relate to my research project. Basically, the late 1960s was a tumultuous time in Hollywood. The industry was plagued by a mini-recession as film fought with TV and other entertainments for viewer attention and money. The studio system, which had maintained tight control over Hollywood production and distribution, was sputtering to an end after a decade-plus of diminishing returns. At the same time, several overlapping developments within and outside the industry were affecting filmmaking in dramatic and sometimes unpredictable ways. A few are worth listing:

The wild success of Bonnie and Clyde and The Graduate was predicated, in large part, on many of these factors coming to the fore at roughly the same time. This pushed the studios to chase similar success by producing a new wave of inventive, idiosyncratic films that often broke – both in style and narrative – with many of the standard conventions of studio-era Hollywood. For example, Easy Rider, The Last Picture Show, MASH, Harold and Maude, and The Godfather.

A further development, which had a profound impact on the way the ensuing film culture would develop, was the explosion in the minds of American film academics, critics, and fans of a particular brand of auteurism. That’s something I’ll take up in more depth in my next entry. It is worth pointing out, though, that the type of auteurism that became fashionable in 1970s America was one that valorized the work of directors above all others associated with film production, including key creative talent in front of and behind the camera such as performers, writers, producers, editors, cinematographers, designers and others.

While I contend the valorization of the single author marginalizes the work and creativity of all non-directing talent, this has been especially true of women. This is partly due to the historically sexist nature of Hollywood in which women were given very little opportunity to work in most production capacities. But in this project I intend to explore how it is also due to a sexist component of auteurism itself and the way that sexism continues to pervade the study of film. This is one of the main reasons I’ve chosen to situate my work in the 1970s.

NH saw an influx of women into a variety of production roles in numbers previously unheard of in US cinema. While 1970s Hollywood continued to make it difficult for women to direct films, they did begin working as production designers, writers, producers, even – by the end of the ‘70s – as cinematographers (Brianne Murphy was the first woman to act as director of photography on a Hollywood studio film – in 1980). Even editing, which has often been considered a woman-friendly role, was mainly closed off to women before the late ‘60s. To be sure, there were a lot of women editors in the teens and twenties (when it was seen as something akin to sewing, so . . . “women’s work”), but with the coming of sound, editing was elevated to a craft and women were generally excluded for the next 3-4 decades.*

Yet even with this influx of women into the production arts during NH, when scholarship has focused on non-directing, non-performing talent, its primarily focus has been on men. Here’s a very unscientific chart I put together as part of my research proposal: 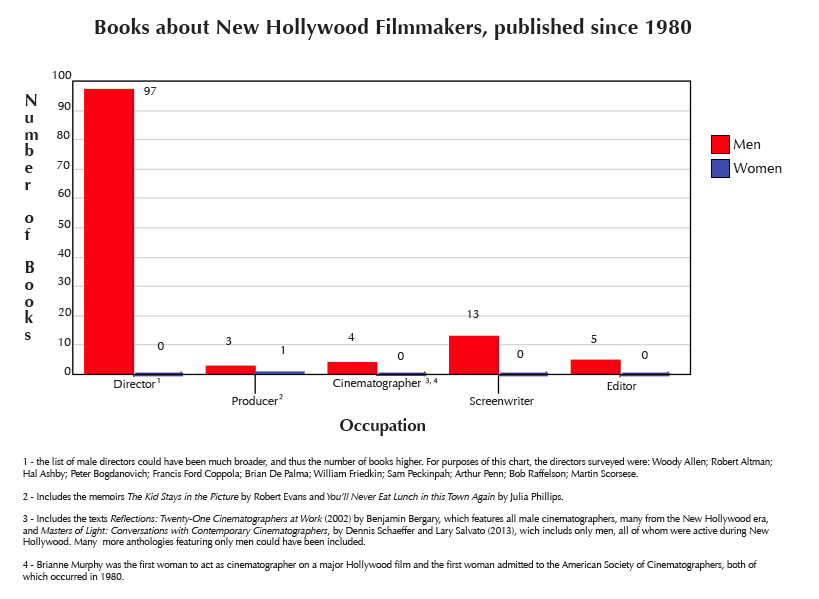 It’s based on the perusal of several web sites for books about New Hollywood filmmakers, and while it’s primarily anecdotal, I think it shows both how attention to directors overshadows non-directors, but also how research on men overshadows that on women. As this project develops, I will argue there are correlations that can be drawn between the marginalization of women’s participatory authorship over the last four decades, and the way Hollywood continues to devalue their talent in the present – in other words, refusing to recognize the immensity of their past contributions makes it easier to diminish their ability to contribute today. Film studies – both popular and academic – has a lot to answer for on this.

In my next post I’ll explain in more detail why I use the term “auteur paradigm,” and how a particularly insidious 1970s form of the auteur sunk its claws into film studies and has held on for forty years!

In the meantime, though, I welcome additions, corrections, or further thoughts on any of the above.

*(There were of course some notable exceptions, such as Anne Bauchens and Margaret Booth. However, as David Meuel explains in his recent book Women Film Editors: Unseen Artists of American Cinema, “since the 1920s, the majority of Hollywood film editors, supervising editors, award winners, and editing icons have been men”).