(Originally published 4 August 2014. Kind thanks to Catcher in the Reel for permission to repost.) 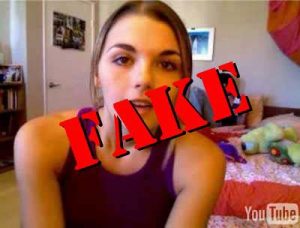 This article is part of an ongoing project on the topic of web series that will discuss a few key examples over the course of the summer.

On 13 September 2006, The New York Times ran a piece with the headline:The Lonelygirl That Really Wasn’t. Writers Virginia Heffernan and Tom Zeller, Jr., wrote to report on a recent discovery that was rocking the still-nascent YouTube community: Bree Avery, the vlogger who had been posting videos under the handle “lonelygirl15” since earlier that summer, was actually an actress named Jessica Rose, and her vlog – a supposedly authentic series of real-life videos – had all been scripted. This revelation might have passed without a ripple had it simply concerned the little-known ramblings of an obscure teenager. But lonelygirl15 was hugely popular. In the early days of Youtube, when it was still more a social networking site than simply the video depository it would become, her vlog had developed a mass appeal, with response videos regularly posted and huge online communities – both on Youtube and on MySpace – dedicated to discussing the ins and outs of Bree’s life. When it was outed, lonelygirl15 was on the verge of becoming the most highly subscribed channel on Youtube (a claim it would actually stake a few days after the outing and hold onto for seven months).

Within this world, authenticity ruled all else. It did not matter how good your videos were, how crisp the editing or how flashy the effects, as long as whatever you brought to your vlog came from the heart (in fact, it was in part the highly professional nature of Bree’s videos that first clued observant fans into the vlog’s possible fakery). The uncovering of Bree as Jessica was understood by many in the community to be a huge deception of them as viewers (nobody likes to be taken in), but also as a kind of nasty ridiculing of the whole idea of vlogging as a communal experience. Lonelygirl15 had betrayed them.*

But Lonelygirl15 had also done something else, something perhaps much more significant in the long run: it had proven the popular viability of the scripted web series. In fact, it was after the Times article ran that Lonelygirl15 moved to the top of Youtube’s most subscribed list, and it was with the full knowledge of the show’s scripted nature that viewers kept it there for so long. The web series had arrived.

A Bit of History

Lonelygirl15 was not the first web series, nor was it the first scripted web series or even the first live-action web series. Web series had been around nearly as long as the Web itself, and interactive on-line storytelling actually predates the Web. The series generally considered the “first” web series was The Spot, which ran from 1995-1997. The Spot was modeled on the very popular Melrose Place, and followed the lives of five twenty-something Los Angelinos sharing a house and working out their typical twenty-something problems. It was mainly text-based, but also included plenty of photos as well as some short video clips. Viewers could interact with the characters by giving them advice on message boards, advice that would sometimes affect the direction of the plot or certain character arcs (here’s a hilarious early TV story on the series). According to series creator Scott Zakarian, at the height of its popularity, The Spot was getting nearly 100,000 hits a day, which is a phenomenal number for the mid-90s Web.

However, as readers may recall, in the early days of the Web up through the mid-‘00s, video-based content was not yet an ideal medium for story telling. Although by the end of the 1990s online video formats such as AVI and Flash were in existence, most users still connected to the Internet via dial-up – who can’t recall the frustration of ceaseless buffering while waiting to stream a twenty-second video clip? Furthermore, digital video recording was still cost-prohibitive for most users outside traditional media outlets, and those outlets seemed more focused on hitching their wagons to the new wave of television production that was already becoming noticeable by the end of the ‘90s. The Web was being used in intriguing ways to enhance traditional film and television narratives – The Blair Witch Project being one famous example, but also the interactive nature of the on-line communities that developed around the TV show Buffy the Vampire Slayer – but it would really take the arrival of Web 2.0, with its higher bandwidths and dedicated video channels to make viable, long-term web series possible.

This is not to say there were absolutely no web series of merit in the years between The Spot’s demise and Lonelygirl15’s ascendance, but the most successful of them were not live-action. In fact, two of the Web’s most influential series debuted in the early 2000s. Homestar Runner, a Flash-based animation series featuring a host of characters in their own mini skits, debuted on the series’ own homepage in January 2000. In 2003, the machinima series Red vs. Blue debuted as part of the Rooster Teeth’s online channel. Both series proved immensely successful, regularly garnering upwards of 1 million views per episode at the height of their popularity, and both have become foundational texts of Internet geek culture (Homestar Runner’s character Trogdor even got his name dropped during the series finale of Buffy).

Some Definitions & Things To Expect

As influential and sometimes downright awesome as some of these earlier series are, over the course of the next several weeks, I’ll be covering web series of the post-Lonelygirl15, Web 2.0 world. More specifically, this project will discuss live-action, narrative-based web series. While The Spot debuted nearly twenty years ago, and Lonelygirl15 is closing in on a decade since its launch, the web series in its present form has been little commented upon. A few big series (some of which will be the basis for this project’s first entries) have garnered some media attention, based mainly on their popularity. However, little has been written about the appeal of web series to their audiences, and even less has been formulated about the formal, stylistic, or narrative distance between web series and more traditional televised series, or, for that matter, the obvious overlap between the two genres.

So what I would like to explore a bit is what makes a web series a web series. How are these series inherently different from TV series beyond simply being shorter and on the web? Are there aspects of form and narrative that mark the web series as unique in any way, or at least far more distant from television than their surface structures might belie?

One of the key areas of interest is audience connection and fan interaction. There is a big reason why Lonelygirl15 was so appealing – both before and after its outing: she was talking right to you. This method of directly communicating with the audience has been mimicked by other series – The Guild, The Lizzie Bennet Diaries – even when they weren’t pretending to be real – as a way of establishing an authentic emotional connection with viewers.

But the participatory nature of web series often extends to more than simply addressing fans through the camera. One of the ways they do this is through the deployment of paratexts. “Paratext” is a fancy word for anything related to the story that is not actually contained within the story. For example, Lonelygirl15 had a MySpace account via which fans could interact with Bree and other characters. The Lizzie Bennet Diaries had Twitter accounts through which the characters commented upon the series’ action, again inviting fan feedback, and Lizzie regularly took breaks from the storyline to answer viewer mail. With viewers watching on the Web, all the Web’s many tools are at their fingertips, so the desire to take part in the paratextual aspects of a series can become almost irresistible – especially considering most webisodes are under ten minutes in length, regularly leaving the viewer wanting more.

Another issue I will be considering is the way the various constraints of the medium affect form and narrative. Most webisodes are short – between three and ten minutes – and many are shot on a very low budget. They are generally confined to very few, often single, sets; they forgo special effects; they make do with very small casts. So this project will spend some time exploring what effects these limitations have on the series.

A few things I won’t be looking at. There are a lot of great non-fiction web series out there – I get some of my best DIY advice from informational web series (although, as much as I love the Clean My Space series of videos, this seems a bit much!). But what I am interested in for this series has so much to do with questions of narrative and character that there will be no time for non-fiction.

On the flip side of that, I will be shying away from the new, big-budget series that have been produced for distribution on the web. Here I am thinking mainly of Netflix and their series such as Orange is the New Black or House of Cards. First, I am not sure if these series can even be called web series properly. Beyond being distributed on the Web, their production and budgets have much more in common with traditional television series than they do with something written, shot, and acted in by amateurs and semi-professionals as labors of love, which is what most web series are. Furthermore, in dropping the entire series all at once, they remove one of they key draws of the web series, which is seriality over time (a draw the web series does share with traditional TV). For fan interaction to work the way it does with web series, it is almost vital for there to be a waiting period between webisodes so that fans will turn to a series’ paratexts and engage on a deeper, more active level. This is not to say that these big-budget series are not great, or do not contain challenges to traditional methods of production and distribution in their own right. They are simply doing so in ways that fall outside the purview of this project.

So if you are a fan of the web series in general or of one or two specific shows, or if you’re just curious to find out more about this burgeoning medium, please join me here at Catcher in the Reel over the next few weeks as I take a look at what I think are some of the more interesting web series of the past decade and try to get a handle on what makes this medium such a fertile ground for new kinds of storytelling.

(*For an idea of just how deeply many felt lonelygirl15’s betrayal, it’s worth having a look at the many angry and often very cruel comments posted to lonelygirl15’s videos in the wake of the revelation.)