(Originally published 17 September 2012. Kind thanks to Pilvax Magazine for permission to repost.) 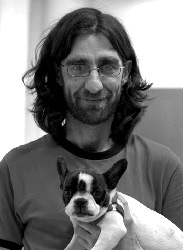 It is with great sadness that we at Pilvax mourn the passing of our dear friend János Tarnóc. János – known to many as Jon – passed away earlier this year after suffering the complications of a debilitating internal illness. János was a poet in both English and Hungarian, a translator, a lyricist, and great supporter of literature and writers. János had a deep interest in forming connections across cultural and linguistic divides. He will be sorely missed.

Born in 1964, János was of that generation of Hungarians who came of age under the waning days of the communist regime and so had a complicated love of his home country. One result was that he spent a good deal of his adult life traveling and living abroad in such far-flung locales as Canada, Israel, and Greece. His travels not only influenced his writing, but also spurred his drive to forge links between poets of different countries and languages. In fact, we first met at a party in Budapest for Swedish writer and poet Per Svenson. Several years earlier, while living in Tel Aviv, János had come across a review that Per had written of some translations of Norwegian poets into Swedish. Per’s descriptions inspired János who, at the time, was deciding to move back to Budapest for the first time after several years away. János wrote a poem about Per, whom he’d never met. Then, several years later, there we all stood in Per’s living room as János read aloud the poem he’d written so many years earlier. It was a thrilling moment for everybody in the room – not only because of the amazing coincidence it involved, but because in that coincidence, and in that amazing nexus of countries, languages, history, poets that it represented, was the embodiment of a poetry extremely personal and yet oblivious to borders real or imagined. It is precisely this kind of vision that girded so much of János’s work.

János was a poet in the visionary mold of William Blake and one of his great loves, D.H. Lawrence. His life’s great work was the long series of interwoven poems that he called Encyclopedia MERZ, influenced by the German artist Kurt Schwitters and his surrealist collage paintings. As János described it, “one puts everything into MERZ, as if into a hat, and shakes the contents to see what comes out of it.” He continued to work on this project throughout his life, first publishing Merz, a Selection in 2000 and continuing to add to it on the Encyclopedia MERZ website. Outside of the MERZ project, he wrote and published poems in both English and Hungarian in journals and monographs, with his most recent book of poems in Hungarian, Őszország, published in 2005.

In addition to writing and publishing his own poetry, János was a fervid translator of other work, both into Hungarian and English. He published translations in English of the visionary Hungarian poet and Holocaust survivor Andras Mezei and Haikuist Gabor Terebess, and in Hungarian of mystical Jewish-American writer Aryeh Kaplan. One of János’s largest endeavors was Crystal Garden, a 2001 anthology of Canadian and Hungarian-Canadian poetry published in a bilingual edition. He started the literary magazine Kilincs in order to publish a wide variety of translated literature, so opening doors to the literary world for burgeoning young Hungarian writers. And he wrote lyrics and sang for the ambient pop outfit EPS.

János was also a dear friend. From the few short years that we knew each other, I have many wonderful memories of him: our trek out to Gabor Terebess’s workshop and warehouse where we got a tour of his amazing collection of Far East antiques; the smile on his face when I gave him my copy of Horton Hears a Who to share with his lovely daughter; János and Betti dancing at our wedding; and so many more.

János leaves behind a great legacy – his poetry and translation, but also in all of us whom he inspired to think in new ways, write in new lines, and to reach across the perceived borders that separate us with an open hand of friendship. His work will live on, but János, the man himself, we will miss.

Border crossings of
no movement
on an empty train.

Raindrops break the
silence at the station.
The platform takes off.