(Originally published 13 November 2012. Kind thanks to Pilvax Magazine for permission to repost.) 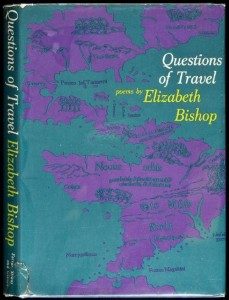 One of the things I’m enjoying about this return to reading poetry is the chance to linger. It’s not that I could never take my time with a poet before, but I think some of the urgency of graduate school – that unhealthy need to consume mass quantities of poems at all costs – rubbed off on me in my earlier stabs at non-university based appreciation. Read a poem. Read it again. Read it aloud. If it was really good, read it to somebody else or (later) send it off in an email. Then move on.

So a big reason I took up this project was to get the opportunity to spend a bit of time with each of the poets I (re-)encounter. And it’s been paying off so far because I’m really loving Elizabeth Bishop, and in some unexpected ways. It’s been more than fifteen years since I paid her any serious attention, and back then I was most definitely more impressed with her epiphany poems. Those like “In the Waiting Room”, where she describes some intimate situation in precise detail only to come to a startling or sometimes even profound conclusion by the end. I was drawn to them in part because younger me thought that’s what poetry was supposed to be about (or at least that’s what I remember younger me thinking). Also, I think, I preferred those poems because they tended to be the ones set in the snowy remote northeast – Worcester, Mass, or even further north in Nova Scotia.

I didn’t like the Brazil poems. They seemed too . . . foreign? Not in the sense that they described unfamiliar places, but because they seemed foreign to the poet, different somehow. Gone from most of them are those moments of clarity, those instances of precise understanding. Instead, the Brazil poems just seem to describe things. To be sure, they describe things (well, not just things, but places, people, animals, weather) with exquisite detail and Bishop’s usual propensity for startling shifts in rhyme and meter. But is that enough? At the time, for me, it wasn’t.

But lingering now, allowing myself to wallow in her descriptions, I see the poems differently. I get the imagism at play in them and I’m not only content to let that imagism do its work, I’m downright ecstatic about it – it’s like I’ve been encountering a new poet for the first time. Take this bit from “Arrival at Santos” in which she describes the boat that will carry her and her traveling companion from their freighter to the mainland:

The tender is coming,
a strange and ancient craft, flying a strange and brilliant rag.
So that’s the flag. I never saw it before.
I somehow never thought of there being a flag . . .

Forget about the intricacies of the meter and rhyme for a moment. I just love the way she takes the briefest of moments to point out the Brazilian flag and comment on its appearance before moving on to describe the rest of her arrival. And even that arrival, with its “self-pitying mountains,” its “feeble pink” warehouses, its custom officers and bourbon is nothing more than a moment, a stage. The poet seems to learn nothing (except that, yes, Brazil does have a flag and its own coins), to come to no new profundities. Merely to arrive, pass through, and move on “to the interior,” where she’ll continue to explore the lush and vibrant colors, the compelling new meters, and the electricity all around her without ever feeling the need to explain to the likes of poetry feeders like me. Lovely.