Verse Revisited: “In the Waiting Room” by Elizabeth Bishop

(Originally published 5 October 2012. Kind thanks to Pilvax Magazine for permission to repost.)

I used to be an avid reader of poetry. From about the age of 16 through my early 30s, I regularly acquired, read, read about, and sometimes studied poetry from a variety of styles, schools, and historical periods. Then I stopped. In the early days of Pilvax, I read and edited the poetry selections, but even then my reading of verse not related directly to the magazine was waning. Returning to university to start an intensive post-graduate program five years ago added distractions, and the reasons not to read even a short poem now and then just kept piling up.

So I’ve decided to do something about that. I miss poetry. I miss rhythmic language, I miss the way a particular poet’s cadences and word choice will slip into my consciousness after spending some time with her, I miss the way a trained hand can guide my wandering mind. Having been away for a while, I thought I’d ease my way back in by returning to poets and verse that I enjoyed back in my poetry-reading days . . . before, perhaps, moving on to unfamiliar territory. This occasional column won’t be so much about analysis or close critical reading. More likely, it will be a collection of thoughts and observations, brief and informal, which describes some of my reactions on coming back to poetry. I encourage any readers to add to my thoughts in the comments section. 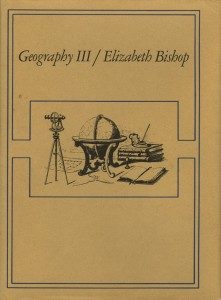 For my first entry I’ve chosen Elizabeth Bishop’s “In the Waiting Room,” which was first published in her collection Geography III in 1976. It’s a bit of a high school poem, to be sure, and it wasn’t my first choice when I was thinking about this project. I always remembered some of her other poems more fondly – especially “At the Fishhouses,” “The Prodigal,” and “The Moose.” But in working my way through her Complete Poems, something about “Waiting Room” kept jumping out at me.

It’s a poem that most poets, most students of American poetry, and maybe nearly anybody who remembers high school English class can recall. A little girl sits in a waiting room while her Aunt Consuela has some dental work done. She flips through an issue of National Geographic magazine. She has an epiphany, a moment of enlightenment in which she sees the world and its people as interconnected. She becomes, momentarily, one with them (“you are one of them,” a voice tells her). The dreary patients who share the waiting room with her are no closer or more alike with her than the “black, naked women” of the magazine, or the “dead man slung on a pole / ‘Long Pig,’ the caption said.”

The poem grabbed me because, in one sense, it’s a fairly traditional example of American Transcendentalism. The little girl in the poem is having an Emersonian eye experience that so many other American poets have had. Yet she’s not out in nature, she’s not contemplating the rocks and the birds and the trees. She’s sitting in a waiting room, surrounded by “shadowy gray knees, / trousers and skirts and boots.” It’s a mundane experience, one she resents at the beginning of the poem (her “foolish aunt”), and yet amidst the mundane she has her moment of universal connectedness (she recognizes how “unlikely” this should be).

It’s almost funny – it would be funny, if only it weren’t so serious. And if only it didn’t lead so organically to that lovely, unsettling question: who am I? And it’s the way that question is reached that really jumped out at me this time around, really reminded me that, yes, I have been missing something:

But I felt: you are an I,
you are an Elizabeth,
you are one of them.
Why should you be one, too?
I scarcely dared to look
to see what it was I was.

“I scarcely dared to look / to see what it was I was.” Those are the lines that sell it for me. They imbue the moment with an element of danger that does not regularly accompany the transcendental poetic moment. I appreciate the honesty of that sense of danger, that sense of discomfort and unease, which comes along with an experience that is too often milked for a triumphant but, perhaps, unearned wisdom.